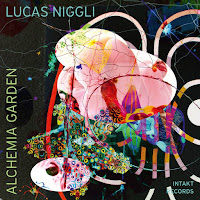 Lucas Niggli is what you might call a drummers’ drummer—his mastery of his instrument takes him well beyond its conventional boundaries, opening up new sounds through tireless experimentation, invention, and refinement. Of course, the term “drummers’ drummer” implies that you need to be a drummer yourself to fully appreciate what he’s doing, and it’s no surprise that Niggli keeps company with other drummers, from his duo with Peter Conradin Zumthor to his Trio Klick to his Beat Bag Bohemia international drum quartet. But that’s not to say that nondrummers—whether or not they can explain exactly what he’s doing—don’t hear something special: It’s Niggli’s ability to plumb the depths of his technical and creative resources and return to the surface bearing undeniable treasure that has attracted collaborators associated with a whole range of traditions, sensibilities, and instrument families.

But on Alchemia Garden he’s all alone. His first solo album, released in the year of his 50th birthday by his longtime label, Intakt, it’s the perfect showcase for his unique skills—skills that in many ways do share something with both alchemy and gardening. There’s an undoubted magic, for example, in the way he transforms his tools into sounds. Coming to Alchemia Garden hoping to hear another Drums Unlimited is like coming to Eve Risser’s Des pas sur la neige hoping to hear another Koln Concert—you’re going to be disappointed. Better to take the album on its own terms, forgetting about the drum kit entirely.

Or almost entirely: Whether to misdirect us or offer something of a foothold, Niggli opens the album in relatively familiar territory with a six-minute trap-set exploration. True, he’s playing with his hands, but so did Jo Jones; gradually, though, he pulls back from those elemental sounds, complicating things with what sound like rattles and brushes until by the end he’s off the skins altogether. This departure carries through: From there, tracks two and three—the metal-scape “Flora Glow” and the clacking “Bakossa Dew”—are pure percussive abstractions best appreciated without the anxiety of pinpointing their sound sources. Don’t lose sight of the gold, that is, looking for the substance it came from. (That said, the experience of watching Niggli play some of this material live has a magic of its own.)

While most of us can hear the difference between a drum solo that plays on melodies or “tells a story” and one that’s loaded with superficial pyrotechnics, in the loose confines of jazz we don’t often get the opportunity Niggli gives us on Alchemia Garden: to hear a carefully structured solo drums album. In other words, the drummer’s achievement here goes well beyond creating a marvelous diversity of percussive life—he’s built a true sonic ecosystem whose parts rely on each other to fully function.

It’s a world of textural and technical contrasts. Compare the dry pops of “Go Goblin” to the glimmering cymbals of “Tuned Arrow,” or “Welwitschia” with its insectile chittering to “Ohia Lehua” with its unfathomably deep malleted rolls. Other pieces move from one mode to another. “Seeds N’ Roots” begins with the ominous sounds of rattling shells over a flogged gong only to develop into a showcase for Niggli’s brushwork. And where some tracks will catch drummers’ ears with their subtly masterful technical displays—the dancing ride on “Mimosa,” the relentless bass-drum ostinato on “Booloobali”—still others perplex and mesmerize. Niggli’s search for novel sounds even leads him, on “Pulsatilla,” to using the air itself as a playing surface. And on closer “Hydnora” we hear what sounds like water—a good reminder that Niggli’s virtuoso antics are more than that: They’re a strange but nourishing garden fastidiously cultivated over the course of a fascinating career.