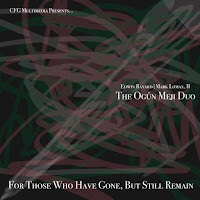 Columbus, OH, is not known for free jazz. It is often overlooked on tours that follow the northern passage from the Northeast through Chicago or that leap between Ohio’s other major cities: Cleveland and Cincinnati. Some acts, of course, do stop here because of the Ohio State University and the city’s otherwise vibrant visual and performance arts scene. That said (and despite the efforts of a dedicated few), the indigenous Columbus free music scene is relatively quiet. (NB: This reviewer has lived in the free music meccas of New York, Chicago, and Berlin as well as Columbus. His view may be skewed.)

That is what makes this release especially welcome. The Ogún Meji Duo consists of drummer Mark Lomax, II and tenor saxophonist Eddie Bayard. Their musical collaboration in various contexts goes back a decade; it shows on this disc. They listen to each other. They share not just a common stage, but frameworks and goals. And they communicate.

This album is an homage to varied musical influences (the “ancestors,” as the website states) that range from the improvisational energy music of Albert Ayler and Sunny Murray to the bluesy, be-bop and hard-bop of local elder Charlie Cook. In the hands (and lungs and lips) of these two well-versed practitioners, this range of influences works in the way that the William Parker compositions on The Essence of Ellington and the The Inside Songs of Curtis Mayfield do, albeit with a different sort of swing. Lomax and Bayard aim for essences rather than mimesis. And, they effectively achieve them while maintaining their own distinct voices.

The first track, “Albert Ayler is Ringing Them Bells,” starts with a drum cadence, which is soon balanced by a spirited saxophone refrain that seamlessly elides into the mellifluous/cacophonous improvisations characteristic of Ayler and his descendants. Bayard plays hard, here, and to grand effect. Around the seven-minute mark, Lomax lets loose on his drum-set for an intense, but measured minute and a half solo that is book-ended by a lively stream of the original motif. It is fittingly Ayler-esque. The next track, “Each Passing Moment,” offers a contemplative balance to the exuberance of the first piece. The first several minutes consist of almost ambient cymbal work, followed by a slow, rhythmic progression on the toms. (Lomax’s extensive experience in classical composition shows through particularly on this track.) Bayard contributes a soft and sweet melody that contrasts the rawness of his earlier playing and evokes the winds and reeds of Yusef Lateef in its suppleness. This song grooves.

The third composition, dedicated to Sunny Murray (d. 2017), is where Lomax really shines. Bayard seems to play more freely on this piece, invoking a range of styles and coming into his own in the ebbs and flows, short melodious lines and more abstract squonks over a complex percussive tapestry. Unlike many drummers in the freer musics, Lomax’s playing always seems measured, even when he is at his most unrestrained. He develops his rhythms and, even, brief melodies over the course of the track while leaving space for acceleration and deceleration, starts and stops, and a genuine flow. This piece is a fitting tribute to a drummer who may not have had a reputation for percussive economy, but still played with a related spirit of intense concentration and inspired abstraction.

The final track is a tribute to a recently-deceased Columbus saxophonist, Charlie Cook (d. 2017). This track begins with a soft, airy tenor that crescendos through a cascade of cymbals and percussive bass lines (still absent a bassist, of course). In the end, it creates a compellingly ethereal atmosphere that provides fitting closure to the conjuring of ancestral voices that this album achieved so convincingly.

Unlike so many recordings today, this album is cohesive. It tells a story. It takes the listener on a journey through a musical history that is at once local (Cook and, via Cleveland, Ayler) and (inter)national (Ayler and Murray). In that sense, this is a release that is unique to its Midwestern musical and cultural surroundings, removed from but reverent towards the same traditions, however avant-garde, as the New York-Chicago-Europe nexus. It is absolutely worth a listen.

You can listen to the entire album and purchase it online through the artist’s website: https://www.marklomaxii.com/album/663608.
Paul on Tuesday, June 12, 2018
Share