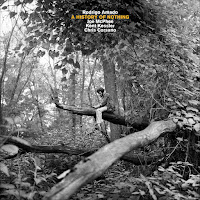 This band, organized by Rodrigo Amado, matches the Lisbon-based tenor saxophonist with the senior multi-instrumentalist Joe McPhee and a rhythm section composed of bassist Kent Kessler and drummer Chris Corsano. Whether McPhee is playing soprano saxophone or pocket trumpet, it’s a classic free jazz formation, with undeniable roots in the “change of the century” ushered in by Ornette Coleman. The first recording by this band, This Is Our Language (Not Two), was named Album of the Year for 2015 by the readers of this site.

If it’s strongly traditioned, there’s nothing antique about the conception. Amado has an existential view of the improvisatory act, clearly articulated in a series of titles that includes Desire & Freedom and the present History of Nothing. His line bears a certain resemblance to Sonny Rollins in his most exploratory period, a big, flexible sound in which each note is lightly but deftly sculpted, never fussy, the inflection almost off-hand but necessary, as if that, too, is a mark of the rhythmic precision. There’s a resistance to excess. Freedom is clearly a responsibility as well as a joy, and it’s emphasized here by the group’s shared commitment: each musician is constantly working in two directions, stretching further and creating cohesion.

The opening “Legacies” and the closing “Hidden Desert” are almost dirges, pieces that move incrementally but are still taut. “Legacies” is improvised with such an ear to complementary detail that it’s literally being collectively composed: bass echoes soprano and a cymbal finds unison with the bass. At this tempo, the roles of Kessler and Corsano are central, each animating time and line by touch and suggestion rather than dense drive. “Hidden Desert” begins with sonic exploration, bowed bass and what sounds like simultaneously drummed strings or perhaps some tuned scraping instrument, otherwise it’s a mystery to me.

The title track begins in close four-way listening with pecking soprano and tenor in the foreground, turning to full-on hard blowing, with Amado pressing against the rhythmic fury of Kessler and Corsano, with the saxophone dialogue picking up spontaneously in mid-stream and then again at the conclusion. It’s a model of free playing at the edge of blowing apart without ever losing control. “Theory of Mind II for Joe” is kinetic free bop by Amado, Kessler and Corsano referencing the piece on This Is Our Language and invoking the member not playing. On “Wild Flowers” McPhee launches things with a delightful pocket trumpet solo that suggests pinching a column of air, then switches to near-identical soprano saxophone as Corsano and Kessler join in; Amado enters with a kind of nursery-rhyme that leads to some more fine four-way dialogue and a spontaneous unison conclusion.

In summary, A History of Nothing is a worthy successor to This Is our Language, the on-going dialogue further developed.