John Coltrane Quartet – Both Directions At Once: The Lost Album: Marking a Transition 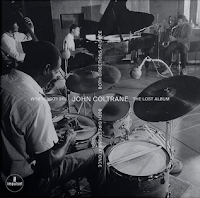 By Fotis Nikolakopoulos
The more I stare at the cover photo of this release, the more I become obsessed with it’s capture of what I think is the spirit of these four musicians working together. Focused but relaxed they seem, while the photographer chooses an angle that does not discriminate the big name from the others. A rather egalitarian choice but not one by coincidence.

Coltrane’s classic quartet stands out as his best. My personal favourite, though, will always be the late incarnation of his free music with Rashied Ali, Pharoah, Alice and the small rotation of musicians. But the quartet consisted of four amazing artists which, at some point, drifted apart following artistic and even personal differences. It happens in real life, why not in music?

But during the time these recordings took place, March 1963, this was not the case. It was a time of transition (a key word for me) for the Coltrane sound, but also a time that these guys were the thing to catch in modern jazz. Their music, as heard in already existing recordings but also in this one, was the post-Bird bop that was transforming itself into something that incorporated more freedom like the struggle for civil rights of the African-American people in the States demanded. Unlike others Coltrane chose never to engage in political causes but music has its ways of non-spoken communication. The quartet’s music was one of the prime choices for those concerned with the movement.

But that was not Coltrane’s choice. Not long ago, while I was trying to put together another piece for John Coltrane, I came across an interview of the great late Rashied Ali. At some point he stated about “Coltrane’s resolution” but, unfortunately, without making clear what he meant. Putting my own thoughts on other people’s words, I always believed that while his physical health deteriorated, his spirit was lifting all of the people listening to his music higher. As he was coming closer to his death he gave more and more. That was his resolution for me.

The importance of this recording is not so much about the music. It is the chronological value of it. As I already mentioned, it seems to mark the beginning of a transition, a path that eventually led him (but of course not alone) to a music free from all constraints, a spiritual message of freedom, devotion, pathos and love like no other. By early 1963 John Coltrane had already started taking big steps in this path and while he accelerated his fellow musicians couldn’t keep up thankfully for us, since he found others who could.

It must be mentioned that the title of this release is a well chosen one. When you put the record on -especially on the never heard before excellent tracks- you definitely feel that this is a two way street. One looking back, the other going straight-ahead forward. We don’t have second thoughts though. Impulse is going to make some money out of it, as this is for me the archival recording of the year. I just wish they’d be more “lost” records form the era of Ascension and on. Until then play this record on your turntable again and again as there are a lot of impressions but meditations were still to flourish.