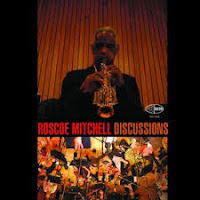 Roscoe Mitchell has said that the reason he stayed away from writing orchestral works was because he thought that they wouldn’t get played. The cause for his recent reconsideration is that so many offers were coming to him to do concerts with different orchestras around the world, that it allowed him to come into the orchestra on his own terms. ForDiscussions Mitchell selected 4 improvisations from his Conversations diptych with Craig Taborn and Kikanju Baku (FJC reviews here and here ) and had them commissioned for creative transcription by colleagues and students for orchestra, performed here by 19 diverse musicians conducted by Steed Cowart (Mitchell’s Mills College colleague). The remainder of the album consists of two duets between Mitchell on sopranino saxophone and the fantastic Mexican flautist Wilfrido Terrazas, as well as two collective improvisations from the ensemble.

The album begins with ‘Cascade’, the avian-like dialogue between the sax and flute resonates and scatters across the stereo field. Terrazas provides swift runs and percussive pops as Mitchell strews the measures with shrill contours and piercing counterpoint. ‘I’ll See You Out There’ from the album Conversations I is the first of the scored improvisation pieces. The original is very sparse, just Mitchell on reeds and Craig Taborn on piano. They merely suggest a structure, so spare is the instrumentation. The orchestral version starts off quietly as well, with strings replacing the piano parts; other woodwinds, brass, and percussion enter fluidly. The mood of the original piece remains intact throughout, but this time around there is much more ornamentation and drama. The piano introduces itself only towards the end of the piece. ‘Discussions I’ is the first of two improvisations by the ensemble. Horns bleat over tangles of color laid down by the string, vibes, and flute. The piece becomes increasingly busy, with new dialogues being started and others joined. The flutes and vibraphones on this piece are particularly lovely, as they add airiness to the margins that bring balance to Mitchell’s caustic sax runs. The use of the double bass is more prominent in this track as well, with its understated notes sounding off the piece. ‘Cracked Roses’ from Conversation I is the second scored improvisation performed by the ensemble. Similar to ‘I’ll See You Out There’ the original piece is skeletal, with Mitchell and Taborn sketching soft shapes and contrasts against Baku’s drums, which supply the piece with an anxious impetus. Again, listening to the two pieces separately and back-to-back, the orchestral arrangement is incredibly faithful to the original whilst developing on some of the ideas proposed in the improvisation. Suggestions from the original are embellished in the remake, careful listening is rewarded here. The forward propulsion of the original rhythm is present, only with an orchestral percussion sound palette.

‘Frenzy House’ from Conversations II is a study in timbres from Mitchell over Baku’s hyperactive drums. Taborn’s presence is largely in the background, embellishing the clatter with swelling electronics. The scored performance retains the searching feel of Mitchell’s playing on the original, but instead of his lone reed there are now a variety of instruments probing the texture spectrum. The drums build and accent rather than propel the track as vibes, piano, and strings highlight the structures suggested by the original. ‘Home Screen’ is the second collective improvisation from the ensemble. The way the instrumentalists navigate this space is exceptional. There is so much communication and interplay within the group it sounds cohesive. The amount of musical information presented in the piece is striking; themes morph and meld into new themes with a level of interplay verging on telepathic. ‘Discussions II’ finds Mitchell and Terrazas resuming their conversation on flute and sopranino sax. It is 2 minutes of good hard solid dialogue between the instrumentalists. Lots of intensity and again a tremendous number of ideas presented in such a blistering way that it demands repeated listening. When the din of sound subsides and the final piercing notes fade out, Mitchell can be heard calmly and quietly saying ‘Ok, Ok Wilfrido, thanks man’, to which Terrazas emphatically replies ‘Thank you!’

‘Who Dat’ from Conversations I is the liveliest of the four scored improvs. Where the original sees Mitchell on various reeds dueling with Taborn’s electronics and Batu’s rabid snare rolls and cymbal hiss, the scored piece expands on these ideas radically with this 22 minute version of the 6 ½ minute original. An intro of strings recedes into still space occupied by vibraphone, chimes, and percussion pocked with Stockhausen electronics. The brass brings commotion to the proceedings, and a fantastically odd reinterpretation of Mitchell’s original lines on trombone highlights the first half of the track. Brass and strings enter into heated discourse before the piece again falls back to the halcyon and playful dialogue of the electronics, vibes, and percussion. The strings and piano pick back up the levels of buzz and connect in an active interchange with the horns. The piece closes over percussion faithful to Baku’s roiling performance on the original.

This review comes a bit late as this album was released last year but it’s been worth taking the time to try and assess it properly. I hadn’t heard the Conversations albums before writing this review, but as the previous reviewer noted they are certainly worth your time. It was especially gratifying (but not required) to have spent some time with those records when listening to the scored reinterpretations of the originals on Discussions. With the exception of ‘Who Dat’, Mitchell selected sparse pieces that merely suggest forms. Like the use of an underpainting, the orchestral scores were built up on top of these suggestions and provide unique expressions while retaining the ghosts of the originals. ‘Who Dat’ on the other hand takes the experimentalism of the original to new places, and with that progresses the definition of orchestral music. The collective improvisations on this album are well done and enjoyable, and the orchestral performers sound like they enjoy the unique setting and the freedom afforded by this type of music. Roscoe Mitchell continues create art at the highest level, and it’s a remarkable thing that after so many years of innovation he continues to produce some of the most forward thinking music in the world.