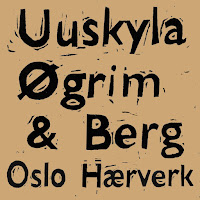 I first heard Peeter Uuskyla on the album Live at Nefertiti. I was first drawn in by Peter Friis-Nielsen’s frenetic bass and Peter Brötzmann’s balance of sheer force and energy with, at times, acute tenderness. (Actually, this recording might have been my first exposure to all three musicians.) As I listened more attentively, I grew attracted to Uuskyla’s loose but steady, rock-styled drumming. Simply put, it fit.

And here we are, 19 years later, and Uuskyla is party to another live, freely improvised trio recording. This one was recorded in Oslo’s Kafé Hærverk, just 200 miles due north of Gothenburg, home of the aforementioned Nefertiti club and the eponymous Brötz, where the trio captured here recorded their first live album, LAIV, in 2016. The connections run deep. That said, beyond the physical continuity of a shared drummer, this trio bears little resemblance to that led by Herr Brötz.

On this album, Uuskyla teams up with bassist Anders Berg and guitarist Tellef Øgrim. The result is alternately in line with and a departure from what one might expect from this power trio. Oslo Hærverk flows in a way that, for instance, the studio release Ullr (FJB review here ) does not. In doing so, it sacrifices some of the intensity and chaos of the group’s prior output for a single itinerant, improvised track broken into five parts that methodically builds and fluctuates over the course of the 48-minute performance.

Uuskyla’s drumming reminds me of what drew me to him in the first place. It is inventive and varied, simultaneously calculated and unfettered. He provides a foundational groove through most of the album. Berg’s bass is heavy. Largely eschewing the rapid pizzicato flourishes he has worked into previous recordings, he opts for a propulsive drones and undulating pulses that, at times, evoke, Bill Laswell. Øgrim, meanwhile, bobs in and out with atmospheric, feedback-heavy guitars. The unquestionable primary influence, here, is Jimi Hendrix. More contemporary and maybe even more meaningful parallels, however, can be drawn between Øgrim, Raoul Björkenheim and Anders Nilsson. All three draw inspiration from Hendrix’s freer playing while avoiding the onanistic traps that so many guitarists inevitably fall into during extended improvisations.

What is most striking about this album is the way in which the musicians anticipate and respond to each other. They sound like they have worked out at least a roadmap beforehand. Some of this may come from the fact that no single member outshines another. They seem less concerned about virtuosity than effect. They seem less focused on novelty than on balance. The tracks flow steadily, though creatively, from a forceful but measured free rock jam (“Tlaxkon”) to a funkier, more meditative track (“Stay Peaceful”) to the deconstructed blues number (“Ofilikki”). The fourth cut, “No Temple No Homes”, returns to improvisatory rock of the first track and the final track, “Close to Closed,” slowly crescendos from a flittering guitar run to an utterly satisfying noise-rock jam.

With the proliferation of live releases concomitant with the advent of digital music, I often wonder whether so many performances really need to be documented and presented to the public. Then, I find an album like this that clearly caught a special band on a special night. And, I start to allow space for
the exceptions.