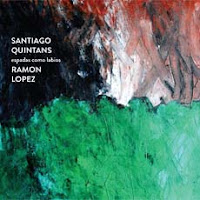 This set of improvised duos comes packaged with a title borrowed from the Spanish Surrealist poet Vicente Aleixandre, which translates as 'swords like lips', and one of Lopez's own abstract expressionist influenced paintings which adorns the cover of the album. Art seems to be just one facet of the creative expression of Lopez, as are his musical endeavours, so it seems fitting that one of his pictures provides the visual for the music contained within, as well as sporting the apt title of 'Two Forces' to boot. The last time I reviewed Santiago Quintans' music was on last year's album Sun Dome, also a duo album with saxophonist Matthieu Donarier, where the pieces were short, concise, economic, both composed and improvised, which didn't outstay their welcome, as I remember describing them. Espadas Como Labios is different from this, with much freer sounding pieces that are much more true to the searching experimental notion of improvisation as a genre, as opposed to a technique or a set of possibilities. This doesn't mean to say that they are all long, wandering pieces, as the set is made up of purposeful improvisations with direction and style that range between one-and-a-half to seven minutes in length.

Lopez's drumming is certainly not there to keep time, and as one would expect within an improvising duo his splashes of colour and intricate rhythms are on equal measure with the guitar. Quintans' guitar freely produces an array of sounds from volume swells, ambiguous arpeggiated harmonies to introspective melodies, and the subtle use of looping to provide a further accompaniment and harmonic counterpoint to the melodic lines.

Across the ten tracks, stand out pieces include, the title-track with it's graceful looped ostinato, 'Ciudades Desnudas', a percussion heavy piece, with nicely blended string rubbing and sounds beyond the fretboard, and 'Arroyo Breve', with its simple plainsong melody and organ-like voice leading providing the contrasting material. There's also the shortest track, 'Pasatiempo', an energetic outburst full of confidence and bravado, and the last piece 'Olvido de lo Criado', a playful ballad that sweetens the end of the set.

There is an air of calm over the entirety of this album, despite the musical activity and dynamic surges in the surface material of the individual pieces, the album seems to deliver an aura of serenity, and it was this that struck me first when listening. The individual moments of engagement, attack, and sounds demanding attention are also there, but this comes later after repeated listens. This is a very enjoyable document of Lopez and Quintans performing together, and Espadas Como Labios would be a worthwhile addition to anyone's collection of improv recordings.
Paul on Wednesday, August 01, 2018
Share