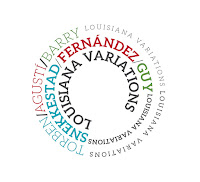 Torben Snekkestad and Barry Guy first worked together on 2015’s impressive Slip, Slide and Collide - that recording, with its labyrinthine improvisations and near-feverish eruptions, proved the duo to be fiercely attuned to one another. Now, on Louisiana Variations, another voice is drawn into the fold - that of Spanish pianist Agustí Fernández, a long-time collaborator with Barry Guy and an excellent composer/improviser in his own right. On this release, the trio lose none of the intensity previously kindled by Snekkestad and Guy; if anything, the fire is stoked, the coals are prodded, and the improvisations whip out wilder and further than before.

“LV #1” gets things off to an inconspicuous start, with the players circling one another tentatively. Snekkestad employs a number of extended techniques - wheezing exhalations, conch-like sputters, and the like. When he does transition to more traditional tones (as he does on the latter half of the track), his runs are almost serene. It speaks to Snekkestad’s talent as a saxophonist and improviser that both approaches suit the piece well. Barry Guy is as interesting as ever, moving from arco to pizzicato with aplomb; it’s unfortunate that the bass is mixed a bit too low here, but the distinctly tactile tones that he produces nonetheless help to color the improvisation and lend it a sense of aggressive urgency. Fernández, with his rapid, percussive attack, matches both Snekkestad’s timbral explorations and Guy’s raw physicality. As the improvisation winds down in the last few minutes, Fernández (by way of omission) introduces a sense of space into the piece that, gradually, starts to crack at the seams - his notes begin to bunch up and cluster, buoyed by Guy’s distended groans.

In “LV #2,” the lightfootedness that Fernández displays on the first piece is uprooted entirely - instead, he utilizes various extended techniques that engulf Guy and Snekkestad in an outpouring of creaks, scrapes, and wind-blown acoustic effects. Eventually, these harsh tonalities give way to a hellish choral section: the three players each release a stream of notes that, taken together, seem like approximations of some infernal inversion of glossolalia. After the somewhat harrowing abstractions of “LV #2,” the third improvisation, though carrying a seed of foreboding, is rather contemplative and mild.

The final two improvisations are the longest and, perhaps, the most exploratory. “LV #5” opens with unnerving sheets of sound from Fernández and Guy’s rumbling cascades. Guy and Fernández have worked together for a long time, in various contexts, but to hear them engaged in such raw expressions of physicality together will never not be invigorating; when Snekkestad joins in with his sinewy, serpentine runs, it’s as if an insect were alighting on the face of a monolith. On “LV #6,” the final piece, Snekkestad opens with a solo that, despite its relatively straightforward development, carries shades of the enigmatic. Underneath, Guy traces out fragments of arco that emerge, surge, and dissipate. By the improvisation’s midpoint, Fernández inserts himself into this disquieting space, employing various extended techniques that serve to prod both Guy and Snekkestad into a kind of feverish abandon. In the last few minutes, Fernández returns to the percussive style of “LV #1” - rapid-fire clusters and pounding repetitions that, along with Guy’s turbulent bowing, bring the piece to its climax.

Fans of the esteemed Aurora Trio (Barry Guy, Agustí Fernández, and drummer Ramón López) might find Louisiana Variations hard to stomach; unlike that trio’s more melodic and composed approach, the trio of Snekkestad, Fernández, and Guy make music that is uncompromisingly bleak, and there is a little in the way of a melodic “thread” to grasp onto.  Nevertheless, for those who are drawn to this kind of raw, unfettered interplay, Louisiana Variations is likely to be a treat. These three players are masters at carving out a sonic space (and then filling that space with all manner of tonal and timbral mutations). It’s an adventurous release from an adventurous trio of improvisers - what more could you ask for?
Stef on Sunday, August 19, 2018
Share