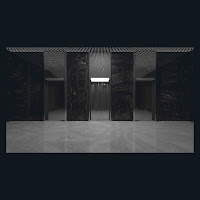 It's amazing that musicians release solo albums as their first album ever. A daring undertaking, but Clarice Jensen wouldn't be the first one. It's a courageous adventure: you're on your own. Any comment or criticism touches you, and you only. There is no escape behind an ensemble or behind others.

Clarice Jensen is a classically trained cellist from the Juilliard School, and artistic director of the American Contemporary Music Ensemble (ACME). She is equally comfortable playing Bach's cello suites as recording and performing with pop idols such as Paul McCartney, Nick Cave or The Arcade Fire.

On this album, she does something else entirely, using effects and loops which hide the performance of the single instrument in long, almost ambient and drone-like developments.

The first track was co-composed with the late Icelandic composer Jóhann Jóhannsson, and offers slow, almost meditative cello sounds, to which additional layers are added, some higher, some lower, creating a very spacious atmosphere. The second track, "Cello Constellations", blends no less than 25 multi-tracked cellos intersecting computer-generated sine waves, yet despite this, there is no wall of sound, but rather a fragile fabric of gliding tones, that slowly, very slowly develops and gets more momentum and power. The last two tracks, "For This From That Will Be Filled", are again carefully construed, with sounds that swell and subside like waves, mimicking the deep resonance of a pipe organ, majestic and massive, with repetitive cello phrases piercing through the backdrop, meditative and insistent, shifting into again a multi-layered foundation for its second part, intense and dark, slow and majestic, and out of this dense mesh, for the first time on the album a single cello improvisation can be heard, discernible and pure, accompanied by announcements from New York's Grand Central terminal.

Even if it's not remotely related to jazz, Jensen's musical vision, and her deliberate intent to create some new listening experience, will probably also please quite a number of our readers. It is meditative at times, and clearly inspired by composers such as Bach and Glass at moments, as well as modern ambient and electronics.

Worth listening to, alone, on a quiet evening.