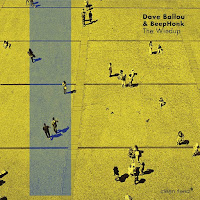 Over the past twenty or so years that he’s been active, Dave Ballou has found company with some of the brightest lights in contemporary jazz - Satoko Fujii, Mario Pavone, and David Liebman, to name but a few. His own records as both a leader and soloist (last year’s Solo Trumpet being a fascinating entry-point into the latter work) have further established him as an intriguing voice in his own right. On The Windup, Ballou brings his singular vision to BeepHonk, a trio consisting of Anthony Pirog (on guitar and effects), Adam Hopkins (on double bass), and Mike Kuhl (on percussion). Recorded live at the Windup Space in Baltimore (hence the title), The Windup contains wild, incendiary shards, hazy stretches of stillness, and lots in-between; combining as it does the acoustic, the electric, and the occasionally demented (see: Pirog’s guitar effects), the album is a unique addition to Ballou’s catalogue and a fine beginning to BeepHonk’s recorded career.

A dizzying fanfare sets the pace on “Fluffer Nutter,” with Ballou and Pirog locked together in an exhilarating cascade of notes. That motif rears its head in fits-and-starts throughout the piece, but Ballou and Pirog never get too comfortable with it; instead, the two of them explore a variety of melodic paths and tonal mutations. Pirog, in particular, uses effects to extract shrieks, static bursts, and assorted other palpitation-inducing sounds from his guitar. Ballou doesn’t let the lack of electrical assistance slow him down - he careens through a jumble of ecstatic figures that bunch up, collide, and ultimately dissipate in the face of Pirog’s searing blasts.

“BeepHonk,” ostensibly the group’s theme song, is tantalizingly odd. Over the course of 15 minutes, the players systematically deconstruct the celebratory pyrotechnics of the previous piece, opting instead for erratic lurches and wobbles. Bassist Adam Hopkins opens the proceedings with a shambling solo, a drunken prelude that eventually tangles itself up into agitated knocks and scrapes. Likewise, percussionist Kuhl lopes along at a weary pace, his sparse taps and jangles serving as the barest of accents. As the piece unfolds, the pace quickens and more defined shapes start to emerge - Ballou becomes characteristically loquacious, Kohl twitchy and ornate, and Hopkins a sober rhythmic anchor. Pirog is perhaps the most interesting force here, manipulating and sculpting his guitar-tones into wheezing transmissions from an alien world.

“Nice Spot-Another Fool” is arguably the center-piece, taking up as it does half of the album’s runtime. Nevertheless, it rejects both the delirious explosiveness of “Fluffer Nutter” and the indirect excursions of “BeepHonk” for a more thematic sense of development. The first few minutes call to mind the final moments of some imagined spaghetti Western, with Pirog’s distant wails bunching up like clouds over bone-dry terrain. Hopkins’ use of arco is particularly apt, offering a somber counterpoint to Ballou’s lightfooted soliloquys. Kuhl’s subtly rolling pulses complete the scene. It’s undeniably lovely, but it’s not to meant to last - Hopkins soon transitions to a bustling pizzicato and Kuhl to a rapid clatter. This section is probably the most straightforward of the entire album, with its scampering sense of swing and forward momentum. The piece undergoes several such build-ups and subsequent dissolutions; it’s precisely this tension that imbues the composition with a kind of filmic scope - but there are no quick climaxes here. The sections that do resemble a clear denouement are quick to collapse back into more indistinct modes of expression. By the time the track ends, you may not be certain whether you’ve moved in a straight line, a circle, or traced out some other figure in the desert sands - but, like me, you’ll likely find it to have been a fascinating trek.

The Windup is a varied and engrossing blend of improvisation, composition, and soundscaping, and with each of these elements in just the right amount to ensure that all sorts of listeners find something to appreciate. Ballou and Pirog, in particular, bring an endlessly engrossing sense of adventure to the proceedings, exploring not only a wide range of melodic paths, but also (especially in Pirog’s case) delineating the boundaries and limits of what they can do with their respective instruments. A fine listen!
Paul on Saturday, September 08, 2018
Share