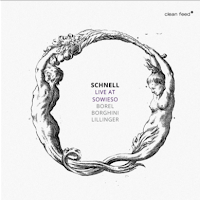 “Schnell“ is the German word for “fast“ or “quick“ and in this case the band’s name says it all. According to the liner notes, Pierre Borel (saxophone), Antonio Borghini (bass) and Christian Lillinger (drums) use the “bebop tradition as a starting point to investigate speed, stasis, trance, intuition and limits“. The music of the trio resorts to masterpieces of the bebop era such as Charlie Parker’s “Anthropology“, Art Pepper’s “Susie The Poodle“, Sonny Rollins’ “B. Quick“, and Stan Getz/Dizzy Gillespie/Sonny Stitt’s “Be-Bop“, being a resource or a prototype which is newly interpreted with today’s musical possibilities. With speed as the basic principle, the music is always in danger of being a simple means to an end. Here however, the players explore the limits of playability of motives and the structure of the classic bebop form by inventing new patterns, including abrupt harmonic changes and studies of over-revving.

“Schnell I“ can be used as evidence for this thesis. In the first three minutes a motif is repeated almost 70 (!) times, the band introduces, modulates and extends it constantly. This saxophone head lasts just one second at the beginning, at the end of the introduction it’s expanded to three seconds. While the sax remains relatively static, bass and drums offer more variations. Lillinger plays time, and especially in the first minute, he just adds fuel to the fire on his cymbals. Like Borel, he makes slight changes, but when he does, it’s like a real break, for example when snare rolls replace the cymbals before a strict snare timing takes over. Borghini’s bass follows a similar pattern but goes astray much faster, swaying to and fro between alternated riffs, staccato notes and free passages. So much as to “speed investigation“. In the following swing part, Borel quotes jazz classics galore, everything’s still hurled out at sonic speed, as if you played a 33 record at 45 rpm. On the one hand the trio retains that energy, on the other hand they don’t fall prey to the frenzy of speed either. They take care of breathers in a clever and elegant way. In the middle of the piece Borel drops out and Borghini bows his bass, gliding into ultra high notes, while Lillinger whirls on his cymbals. Tension is created and finally relieved by a new saxophone riff (reminding me of Katchaturian’s “Sabre Dance“), again repeated several times. During the whole piece, various heads are constantly introduced and dumped, the trio swings almost traditionally, gets lost, changes dynamics, and starts from the beginning again. Usually, the heads in traditional jazz are used as anchors, as safe havens during the improvisational process. In Schnell’s approach you’re never safe, the riffs ricochet through the room unpredictably. Even Billy Strayhorn’s beautiful “A Flower Is A Lovesome Thing“ is transformed to a spooky ballad, rather reminiscent of a weird version of John Coltrane’s “Alabama“ or Billie Holiday’s “Strange Fruit“.

In the end, the music shows how you can present outstanding musicianship without getting boring or showing off. Bebop has sometimes been accused of being too self-sufficient and aesthetically stale with the improvisational process becoming less soulful. For Schnell improvisation is still the fundament, they play it on the edge of breathlessness, ultra-fast, with intuition and feeling as core essentials.

Watch a part of an earlier gig at the same venue: