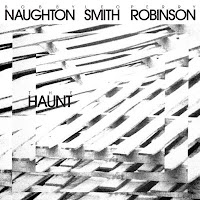 Lithuania’s No Business label has a fine track record for bringing lost music to light, and this 1976 session led by vibraphonist Bobby Naughton is an excellent example. Naughton became interested in free jazz in the late 1960s, meeting clarinetist Perry Robinson in New York, and was active in the loft scene of the 1970s. He met trumpeter Leo Smith in Connecticut and would appear with some regularity in Smith’s ensembles of the ‘70s and ’80s. Naughton had a few credits on some other major recordings as well, including documents of Anthony Braxton’s 1978 European Creative Orchestra and his Ensemble (Victoriaville) 1988 and recordings by Roscoe Mitchell and Mario Pavone. Much of Naughton’s time, however, has been spent away from music, earning a living as a locksmith before recently returning to music. In the 1970s he released a few recordings on his own OTIC label, of which The Haunt is the first to appear on CD. Hailed on its first release, it’s a lost masterpiece by musicians of the first rank.

It’s a music based on keen familiarity. The absence of anything like a rhythm section immediately places it in the special creative lineage of the chamber jazz avant-garde, one that began with the Jimmy Giuffre Three circa 1961 with Steve Swallow and Paul Bley and developed with the Creative Construction Company of Anthony Braxton, Smith and Leroy Jenkins. The pieces heard here are all Naughton‘s compositions—pieces in which written and improvised elements flow together, whether the movement is from composed ensemble to solo or collective improvisation. Naughton’s works here are distinguished by an abstracted lyricism, a floating quality with an immediately engaging collective sonority. There’s literally nowhere to hide in this music, with each voice cast in high relief whether in solo or ensemble.

In the first moments of the opening title track, the three voices arrive alone, first Robinson with a keening wail and a wide vibrato that will link him to Sidney Bechet, albeit by way of Albert Ayler, then Smith, lower, more reflective, assembling materials, then Naughton, pianistic rather than percussive, notes ringing under the others. Some of his writing here has an Ornette Coleman feel, a vocal and rhythmic inflection that lives here even without bass and drums. On “The Weight” and “Slant” the improvisation is insistently collective, a spirit of continuous creative dialogue shaping the music. Sustained individual statements arise on the pensive “Places,” first Smith, all concentration, then Robinson tending always toward flight, even here sounding like his clarinet might come untethered and soar, but instead fading gently into a collective passage that’s literally both improvisation and theme (Robinson eventually explodes into wild squiggling lines in the upper register, but it takes an added alternate take of “Slant”). That commitment to Naughton’s music is evident everywhere here, arising again in the quietly intense, naked knitting of sounds that distinguishes “Rose Island.” By the time one reaches “Ordette,” the final track in the original LP configuration, the album’s cumulative identity is so strong that you feel the presence of the trio even in the series of unaccompanied solos, the music assuming its shape in the concentrated presence of the other musicians.

The special challenge presented by The Haunt’s spare, subtle intensity may be what has kept it so alive during its decades of neglect.