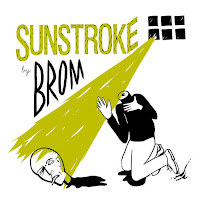 The Russian. Moscow-based group BROM - БРОМ - was founded in 2008 but until recently has been a well-kept secret, unknown to the most of the world. BROM’s eight album, Sunstroke, is the first one to be released internationally and may do justice to this group thanks to the enthusiastic endorsement of Swedish sax titan Mats Gustafsson.

BROM - bass player Dmitry Lapshin, sax player Anton Ponomarev, drummer , Yaroslav Kurilo and new member, electronics player Felix Mikensky - began to act as an anti-statements to the post-rock hype, but later pushed heavily into crossing over free-improv, noise rock and free jazz. Gustafsson asks in his liner notes how such a band can make “something personal within the given frames? When so much already has been done?”. His typical answer: “Break the frames? Love the frames? Hate the frames? Dismantle the frames? Just fuck the frames? Use the frames?”

And as Gustafsson advices, BROM uses and fucks all given frames, straight in-your-face, especially the seminal frames of Gustafsson’s own The Thing, Peter Brötzmann’s Last Exit and John Zorn’s Naked City (and Gustafsson adds many more sources of influence, from Led Zeppelin to Radian). BROM sounds at times as sharing the same gene pool with these groundbreaking musicians, but insisting to inject their proud gene mutation. The influence is so strong that you can recognize the phrasing of Gustafsson in Ponomarev playing or the manic bass attacks of The Thing’s Ingebrigt Håker Flaten in Lapshin licks. But BROM edits this kind of high-velocity, intense legacy into its own personal vocabulary and syntax. Still, as Gustafsson preaches, channeling and transforming this rich legacy into a its own defying call to fight the everlasting stupidities of the world.

BROM's sonic statement is clear and loud from the very first second of the opening piece “Plunge into an ice hole”. Brutal, dense and super-intense kick ass attacks that reach into unbearable stratospheres and then pushes even more, suddenly sneaks to a breezy cinematic detour before resuming the manic grind. “Tuna” and the title-piece sound as twisting the mean rhythmic onslaughts of Italian Zu with Naked City post-modern sonic pastiche into a supersonic cacophony. Mikensky’s electronics on “Queue” add a subversive, irritating layer to Ponomarev's powerful sax theme. “Urtica” suggests BROM in a head-on collision with The Thing, including the open flirt with  a dramatic metal narrative. “Hematoma” offers BROM in its most free-improvised version, eager to experience any adventure and take all risks but also to bare its gentle side. The last “Mingus 30°C” actually boils with an infectious theme, repeated over and over while borrowing from the light, harmolodic pulse of Ornette Coleman’s Prime Time, the shiny elegance of Naked City and the massive nuclear reservoirs of The Thing.

Hard to believe that these Russian guys were stricken by the sun, but you can be sure that they were hit by something as powerful and nourishing as the sun. Seriously badass!!!, as Gustafsson says.