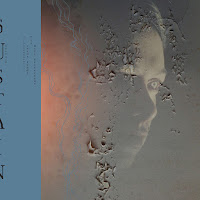 Breaking boundaries, destroying preconceived notions, and then building up something new entirely is often a high risk, but when it works, as it does on this album, the result can be an absolutely unique listening experience.

The French avant-garde death metal rock band "Chaos Echoes" invited Mats Gustafsson to add his part over an improvised performance by the band, already recorded in November 2016. Gustafsson, recorded his parts with Andreas Werliin at RUD Studio in Stockholm, Sweden in May 2017, and the final result was again remixed in France. A rare approach, but not unique, and more importantly: the outcome is nothing short of spectacular.

The band are guitarist Kalevi Uibo, his drummer brother Ilmar Uibo, bassist Stefan Thanneur and second guitarist Fabien W. Furter. The 45' vinyl album or cassette offers two sides of only 12 minutes each. And that is the only disappointment of the release, that it's so short.

The first track, "Spellbound", creates a crushing, slow eery wall of sound, with hard to identify instruments, in a long shifting drone, over which Gustafsson's baritone hovers full of agony and despair. We are in a sonic environment from which there is no escape. It is harsh, subdued and intrinsically violent, intense and measured.

The second part, "Harvest Of Souls", starts with the most incredible collective power beats, hammering in all the energy of the band in slow, precise measures. It qualifies as one of the darkest pieces of music I have ever heard, ominous, apocalyptic, haunting, and built over a steady repetitive drum beat, that gives the whole sound a level of inevitability like time progressing.

Gustafsson is his magnificent self: well-paced, precise and howling and roaring like only he can do it, expressing all the deepest emotions of torment and doom and pain that he can muster. And the French band is throughout at the same high level, keeping the unique sound steady and terrifying, without losing themselves in unnecessary excursions, which gives the whole improvisation that compact and coherent sense of direction that the listener's last minute is arriving, steadily, slowly, in all its horrifying terror.

The limited editions vinyl and cassette are probably already sold out, but the digital version is available on Bandcamp.