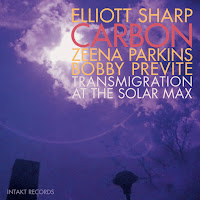 Multi-instrumentalist Elliott Sharp’s long running Carbon ensembles were formed in the epicenter of the artistic energy roiling in the downtown New York scene of the late 70’s/early 80’s. Some of the first Carbon shows were played alongside such NYC luminaries as Sonic Youth, Lydia Lunch, and the Swans. Carbon, like Sonic Youth, harnessed the sounds of punk and no wave and transformed them into something more than just instrumental abstract expressionism. But while Sonic Youth tended more and more towards mainstream music, Carbon has taken free guitar playing into noisier, more abstract, and more psychedelic domains. Sharp has tied the compositional and improvisational core of Carbon to extended timbres, and on this offering we get them in the form of drones, guitar squall, and percussion clusters. Joining Sharp this time out are Carbon ensemble veterans electric harpist Zeena Parkins and drummer Bobby Previte. Parkins is a regular in the downtown NYC scene and has collaborated with everyone from John Zorn to Pauline Oliveros to Björk. Previte, another downtown trouper who doesn’t need an introduction is a close associate of Elliott, John Zorn, and Tim Berne and has been a part of the scene since the late 70’s.

In Annalema Sharp chugs out rhythmic outlines and harmonics over Previte’s bolting toms as Parkins adds pointillistic jots of electricity over the increasingly thick tangle of sound. The song segues back and forth between the chaotic swirls of sound and quieter, more probing half-formed melodies. Sharp and Parkins invoke a pall of drone for the dense Perihelion which Previte breaks up with his forward pushing percussion. The piece unravels over the din as the drums fade, leaving the strings to wail, creak, and squeal. Over the last two minutes a sequence of string harmonics is played, the song ending in chime and chatter. Orrery presents irregular percussion and clusters of tapped out notes over a sustained electric storm. Sharp switches to the soprano saxophone for Aurora, playing off of Previte’s rustling drums and Parkins’ particularly psychedelic sound palette. Sharp electronically manipulates his lines, pleating out cartoon horn noises and quivering strands of sound. He returns to his guitar for the latter third, joining Parkins and Previte in interplay that is both snarled and rhythmic. Anthelion closes the album with the trio playing against a massive electro-acoustic din, their individual instruments reduced to flames flickering from the embers.

A fantastic album overall and a nice addition to the Carbon continuum this is certain to please fans of electric-guitar-based textured improvisation. Dissonance and coherence run hand in hand, just when a structure seems to be dissolving completely it explodes, and vice versa. It’s headspace music that throws you off balance just enough to keep you guessing.