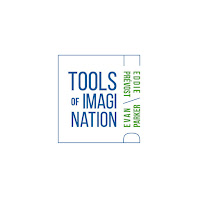 With Tools of Imagination we are treated to a tremendous long form improvisation from Evan Parker and Eddie Prévost recorded in the clubroom of Poland’s Pardon To Tu in September of 2017. Eddie Prévost, a co-founder of AMM and the group’s only physical constant is one of the foremost proponents and practitioners of free improvisation in the world today. His companion for this improvisation is the great English saxophonist Evan Parker, another pillar of the European free improvisation community that’s made this strange and wonderful music his life’s work. The two have recorded together fairly extensively, both as a duo and as part of a larger group, always with spectacular results. Here is no exception as the two masters interlace ideas unhurriedly and with great care for the details.

The single track, Tools of Imagination, begins with the sounds of Prévost’s reverberating bowed metal to which Parker offers refined, bubbling shapes, surging occasionally into squelches of harmonics and resonance. Prévost is a master of atmosphere, having honed his skills in his 50+ year career as a professional noise maker. I have no idea how he achieves some of the sounds he does with his bow-work, but it’s fascinating to listen to. Groans and deep shudders are intermingled with piercing scrapes and razor barbs. Parker’s tenor gushes like an artesian well of molten chrome, a turbulent outpouring of aural globules that flow like a river across Prévost’s extraterrestrial atmospherics. At ~ 20 minutes in, the track shifts gears, the din receding momentarily before revealing Parker playing plaintively over gong-work that reminds me a little of La Monte Young & Marian Zazeela’s Study for the Bowed Disc. Parker continues to push forward, to weave webs of ectoplasm in his distinct cadence, his circular breathing technique tracing its heavy fractals in the thick ambience stirred up by Prévost. At around the midpoint the song shifts gears again and the musicians regroup into a quiescent hum interrupted intermittently by cymbal clatter and supine sax shapes. For the final half Prévost gets back to work bowing, scraping, and striking at his contraptions, framing Parker’s saxophone playing with a dense thicket of sound that he plays off and against, alternating between subtle percussive tongue slapping and breathy multiphonics. The final 10 minutes or so begin probing and sparsely adorned before bursting back into Parker’s woven harmonics and the groaning, squealing sound world of Prévost.

There are certain practices that in my opinion really benefit from preparation and experience, free improvisation being among them. For as free as the playing is on this release, it’s refined in a way that is almost inexplicable to those that are not well versed in it. That’s not to say that there aren’t any surprises here, it’s just that these gentlemen know how to take surprises and run with them. A highly recommended release, there isn’t a dull moment with this one.