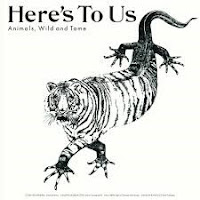 Trumpeter extraordinaire Susana Santos Silva needs no introduction to the readers of this blog. But her partners in this delightful quartet might: Swedes Josef Kallerdahl (bass), Lisen Rylander Löve (tenor saxophone), and Nils Berg (bass clarinet/flute) are all prominent in the European jazz scene, albeit not so much in the free improvisation community. In any event, what they offer together as Here’s to Us is a captivating journey, through a well-conceived melding of composed and improvised musical forms.

Animals, Wild and Tame was inspired by a novel by Vilhelm Moberg, The Emigrants, in which he describes an old language textbook used by Swedish immigrants to the United States in the 1850s. By studying the entire book the voyagers would ostensibly acquire a thorough knowledge of English—and much else, perhaps, given the metaphysical titles of some of the chapters: “Nature and the World,” “Abilities of the Soul,” “Time,” among others. Composition credits are divided evenly among the four players, with each getting two of the eight “chapters” and an additional ninth piece, “Skiftet,” composed by Berg.

The music crafts a perfect balance between carefully presented, patiently developed themes and opportunities for exploration. The opener, “Naturen och werlden” (“Nature and the World”) is a gem of a track, with a gorgeous, achingly slow melody; as Santos Silva’s lambent trumpet crests over the top, the effect is transfixing. But the group eventually opens things up a bit, and as Kallerdahl provides a steady bass line there’s just enough room for extemporaneity—but never at the expense of the piece’s cohesion. A similar dynamic is found on the other tracks, often with Kallerdahl in an anchor role with gentle bass ostinatos, while the horns develop their ideas in close conversation, subordinating individual brilliance to the power of the collective.

Only rarely, as on “Metaller och stenar” (“Metals and Stones”) or “Själsförmögenheterna” (“Abilities of the Soul”) do things get a little wooly, with the four delving into atonality and purer kinds of freedom, and with Santos Silva using the full range of her astonishing technique. For the most part, though, restraint remains the dominant temper of the record, and it’s all to the good, as the melodies of the pieces are frequently stirring. “Menniskan” (“Mankind”) is gorgeous in its steady, muted power, and “Tiden” (“Time”) is no less riveting, with Berg’s earthy bass clarinet joining with Santos Silva and Löve in walking the ever-so-fine line between beauty and abstraction.

This isn’t one of those records designed to get the pulse racing. But for its moments of tranquility and measured grace, Animals, Wild and Tame is a perfect antidote to these turbulent times. One of the nice surprises of 2018.
Paul on Thursday, October 25, 2018
Share