I love solo recordings. They provide an undistorted view to the intimate communion between player, instrument, and environment and, through a dialogue with silence, provide a foundation for the listener to better understand a player’s communication in ensemble. I enjoy when oeuvres have a significant strain of solo work - like Anthony Braxton’s, Evan Parker’s, Ned Rothenberg’s, and fortunately many others in free music - and I enjoy trying to relate one solo recording to a player’s other solo recordings and in turn relate that player’s personal development in solo to what they’re doing in ensemble at a given time. So I enjoy being able to write about these three solos from Astral Spirits.

Astral Spirits is an Austin, Texas-based label started by Nate Cross (of Marriage, USA/Mexico, When Dinosaurs Ruled The Earth) in 2014 that releases improvised music and adventurous jazz. If you utilize labels to discover players and music, you could do a lot worse than keeping up with the Astral Spirits catalog. It provides a platform for established players in beloved ensembles (e.g. Ballister and Survival Unit III), new ensembles (e.g. Icepick and the upcoming Vandermark/Alcorn/McPhee trio), and solo (e.g. Rob Mazurek and Mike Majkowski) and, perhaps most importantly, a great variety of newer players that began recording this decade. Much to my joy, it has a healthy dose of solos from these newer voices.

These are three such solos from this year that I believe establish each player as someone to keep an eye on, if you’re not already. 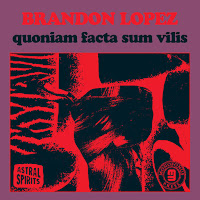 Bassist Brandon Lopez has recorded alongside Steve Swell, Nate Wooley, Chris Corsano, Gerald Cleaver, and other masterful players just within the past two years, he’s just coming off of this year’s excellent The Industry of Entropy, and he’s showing no sign of slowing down with this 40-minute, 8-track release. The title of this recording means “I have become vile,” referring to the book of Lamentations in which Jerusalem is destroyed for the sins of its people; the track title “Lamed” is a Hebrew letter present in the acrostic poetic form of Lamentations and means the stick that prods the ox or, metaphorically, something that gets creation going; I suspect track titles like “Bea” and “Lay” (as in samak) can be interpreted through the Hebrew lens as well to mean “to seek” and involve ritual sacrifice, respectively; “Vanitas” refers to a still-life painting genre containing symbols of death and change and their inevitability; I am reaching, but I wouldn’t be surprised if “For Sal” refers to Salmoneus or Salmacis rather than a friend; and finally Lopez has stated that this recording was “created as an answer to the musical ‘reason’ of the Bach cello suites… [and] seeks to… create something florid and beautiful from the violent and erratic.” However the pieces fit together, it is a picture of violence/death, metamorphosis, and what is created from that process. The bassist here is unlike the bassist on his previous two solo recordings.

Lopez’ style is a Hawthornian caricature, highly physical, lumbering and violent, whose closest analogue is Peter Kowald or Peter Jacquemyn. He bows, saws, scrapes, taps, knocks, rubs, and plucks the entire instrument. You can hear him grunt, groan, moan, and hum while he works. And the communion between instrument, player, and environment is made clear when the reverb from the chapel in which this is partially recorded is used to create a call-and-response effect on “Pa.” It’s difficult to mention other standout tracks without mentioning the entire album. “Vanitas” and “For Sal” are incredibly strong, emotive openers and closers showcasing his dark romantic style. “Lay” shows off his agile but ominous or melancholy plucking that reminds me of something from Dave Holland or Barre Phillips. The bowing in the last two and a half minutes of “Gruppo” is simply transcendental. This is highly recommended and I wouldn’t blink an eye if someone told me it was the their favorite solo bass recording they’d ever heard.

quoniam facta sum vilis is available digitally, on CD, and on cassette. 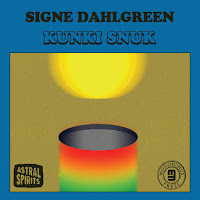 Kunki Snuk is the solo debut of Signe Dahlgreen. Across 45 minutes and 6 tracks, she runs the gamut of extended techniques on her tenor sax: gurgling; tongue slapping; key clicks; multiphonics; overblowing; Aylerian vibrato. Her style is often wild and aggressive and will likely draw comparisons to Brötzmann and Gustafsson. However, my favorite aspect of the recording is her breath. The relationship between breath and the reed/horn/flute-player is an arranged one. Taking a breath can be acknowledged and embraced as necessary punctuation as in the case of Steve Lacy (Josh Sinton, Sound American Issue 9), it can be seemingly ignored as in the case of a blistering side-long Evan Parker solo, or it can even become the art itself as in the case of Michel Doneda, to use three soprano players. Dahlgreen’s relationship with breath is as tumultuous as her playing. Here, she is mic’d so that you hear her breathe in away from the saxophone, you hear her circular breathing when it occurs, and you hear her breath through the saxophone (air notes), particularly bookending the sections of gurgling. For the first four tracks, she goes through very short bouts of circular breathing before seemingly running out of breath, only to demonstrate on “Stannet” that she can do so for an extended period, making you realize that what you might have thought of previously as shortfalls are in fact statements. The last track, “Nò,” is a highly recommended, climactic, all-out attack punctuated by great big gasps. 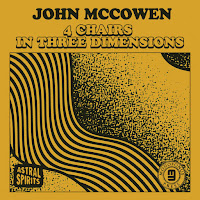 Those with an ear for solo clarinet improvisation most frequently have to settle for tracks and on a blue moon get full albums, like Ned Rothenberg’s World of Odd Harmonics, Alex Ward’s Cremated Thoughts, and Josh Sinton’s recent Krasa, often from multi-reedists and multi-instrumentalists. They would be glad to know John McCowen because he is, at least for now, completely dedicated to the clarinet family and loves a solo. 4 Chairs in Three Dimensions is his fourth solo outing, his previous recordings include a clarinet quartet, and he has a clarinet duo recording in the works. As the title of this recording and the nature of his collaborative clarinet works suggests, McCowen is interested in the dimensionality of the instrument, which is mirrored in the music by a circular-breathing, multiphonic approach that presents multiple facets of the clarinets timbre at once, like a cubist painting. “White Trash” demonstrates this with a relatively static low hum, some more actively played skronky tones, and a high hum that seems to react to those tones, all at once. McCowen also states he views the clarinet as an “acoustic synthesizer;” modulation, phasing, and perhaps additive/subtractive elements seem to be present in some degree throughout the 24-minute, 4-track recording, and are probably responsible for a cool Doppler effect-like sound part way through “Birds of Jamaica,” but I am not knowledgeable enough to discuss the intricacies of sound waves. In practice, the approach reminds me of a louder Stéphane Rives except for the possible standout, “Fu-e,” in which McCowen conjures up a tabla-like rhythm by gurgling a bass clarinet while simultaneously producing chirps.

4 Chairs in Three Dimensions is available digitally and on cassette.

Nice focus on some cool solo releases Keith. I'm not normally a big fan of solo bass albums but, that Brandon Lopez album is great. Haven't heard all the Signe Dahlgreen album yet, what I have heard though is incredible (looks like another addition to that phenomenal-female-sax-players-from-Europe list). Astral Spirits is really on a roll right now. Have put out some of my favorite releases of recent times (Barker Trio, Magee/Irving, Kuzu...).
I actually did an Astral Spirits Special a few weeks ago for my podcast/radio show, because there's just too much cool stuff coming out on the label that I want people to hear to just play a track or two each show. (If anyone wants to take a listen, you'll find it here https://www.mixcloud.com/ma1co1m/free-the-jazz-special-01-astral-spirits/ )

Thank you, Malcolm! I definitely agree that there's a flood of quality releases from Astral Spirits this year. Lucky for us, I think some of the other reviewers have some more Astral Spirits reviews coming down the pipeline, so keep an eye out!

I'd buy more of their releases if they were available in CD format...