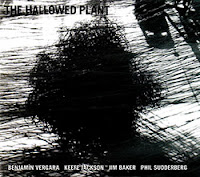 When I first listened to The Hallowed Plant, I was immediately captivated. It’s a work that grabbed my attention and made immediate, intuitive sense. It seems that that the artists had a similar experience; after all, the band recorded it after having only played together twice previously. Chilean trumpeter Benjamín Vergara (trumpet) traveled to Chicago a few years ago and met Chicago-based musicians Keefe Jackson (reeds), Jim Baker (piano/synthesizer), and Phil Sudderberg (drums). It seems the connection was instant, and the music that resulted excellent.

One of the characteristics that makes this album special, and one of the reasons why it is immediately relatable, is the obvious chemistry between Vergara and Baker. The first track (“The Halloween Plant”) begins with just the two of them. They have an unusual knack for combining trumpet and saxophone, playing simultaneously and egging each other on, yet maintaining an expansive concept of space and never overpowering the other.

As Baker and Sudderberg join, it is apparent that this band really understands texture. Though the album contains great melodic content, small shifts in texture drive the organic evolution of each improvisation. Take the second track, “This moves to that” for example. It begins with a dense and jagged set of rhythmic gestures. Over time, the band unexpectedly coalesces around a tonal center and meter, and the piece becomes a sort of abstract blues. It is this sort of shift that makes me appreciate that the album is completely improvised. Each piece is formally concrete, as though intricately planned but comprehensible as such only through the privilege of hindsight.

On the final track “La Repentina Ola”, Baker switches to synthesizer, introducing a new type of spectral exploration to the album. With this change, the band reaches even higher levels of fire. Eventually, however, the music simmers down to excruciating near-silence and a satisfying end. The Hallowed Plant is a concise and well-executed musical statement. After just 30 minutes, it ends where it should, but somehow I can’t help wanting more.

Sadly, Relative Pitch Records's co-founder Mike Panico passed away tragically last week. He has left quite a legacy, and one for which we are grateful. We wish his label co-founder Kevin Reilly the best in continuing the label's support of challenging and exceptional music.
Paul on Saturday, October 13, 2018
Share