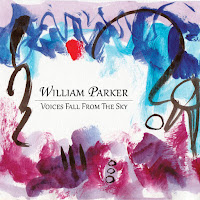 It is said that life is lived forwards and understood backwards, and if something similar is true of music William Parker has provided us with several opportunities to make that assessment. His evocatively titled Voices Fall from the Sky is the latest in a series of box sets released by the AUM Fidelity label, following Meditation/Resurrection (2017), For Those Who Are, Still (2015), Wood Flute Songs (2013) and Centering (NoBusiness, 2012), each collection focussing on a particular medium or period of Parker’s working life, providing a wider perspective on his music. This set – three CDs on the Centering imprint of AUM – is a retrospective of sorts covering Parker’s engagement with the voice and art of song, comprising reissues and the very recent. It gives us a broader insight into the vast output of not only one of the great double bass players, improvisors and collaborators in jazz (it would be easier to list those with whom he’s not worked) but also one of its foremost composers.

As set out in Parker’s notes, his involvement with singers and song goes right back; in his early days he played with Jeanne Lee and Gunter Hampel after meeting them at a bus stop. Over the years he’s placed voices in a multitude of settings, from the wordless vocalisations of the Centering Dance Music Ensemble 1976 (Dawn Voice), the intimate ambience of voice and piano (Song Cycle (Boxholder, 2001) and the vivacious Raining on the Moon with Leena Conquest, ‎to large-scale works with Parker’s Orchestra and the AMR Ensemble It’s unsurprising therefore, that this is a diverse and at times disorientating collection with abrupt shifts in style and format to which it can take several hearings to acclimatise.

Taking the discs out of sequence, CD2 (‘Songs’) is a selection of previously released recordings and features – except for the first track – a singer and just one instrument: either Parker’s bass or the piano of Yuko Fujiyama, Eri Yamamoto or Cooper-Moore, giving the sequence a more unified feel than the other discs and arranged in a satisfying progression. It starts with the broad strokes of Ernie Odoom and the AMR Ensemble in ‘All I Want’, a tribute to Billy Bang, and then scales down to ‘Baldwin’s Interlude’, one of Parker’s first songs, with Ellen Christi declaiming a simple melody framed by a cobweb of plucked bass notes.

Parker uses unadorned, syllabic settings for the voice respecting the natural rhythm of words, enhanced by internal rhymes, and leaving room for subtle colouration, phrasing and improvisation by his singers. He’s been blessed with some truly wonderful chanteuses, sensitive to word meaning and emphasis. In ‘Life Song’ Christi’s devotional sotto voce seems to conjure from the air itself the verse, “How can a tree not get sunlight? / How can a soul not be free?”, and on ‘Falling Shadows’ her bird-like vocalisations flutter and swoop above Parker’s repeating ground bass, as in a chaconne. Lisa Sokolov alternates between roll-calls of great jazzmen and free scat on ‘Band in the Sky’, Parker’s depiction of what happens to musicians after death: “Playing strong forever / No time measured no time lost”.

Like love and a cough, a gift for melody cannot be hidden and Parker’s songbook contains some memorable tunes, like ‘Sweet Breeze’: a wistful evocation of childhood and the smell of his mother’s cooking, and the modest but heartfelt ‘Poem for June Jordan’, each line carefully measured by Conquest’s expressive vibrato. The contribution made by each of the pianists is also significant, accompaniment which compliments and augments, such as Fujiyama’s sparse chord placements in ‘Aborigine Song’ providing a minimal harmonic underpinning for Lisa Sokolov. Cooper-Moore and Mola Sylla from Senegal are perfectly matched in the ruminative ‘Tour of the Flying Poem’, taken from Parker’s small operetta for children. The disc concludes with Conquest and the sublime ‘Prayer’ – with its shades of Donald Ayler’s ‘Our Prayer’ that go beyond the title – one of Parker’s finest songs, a delicate blend of supplication and resignation.

CD3 (‘Essence’) contains the only real disappointment of the collection, but it’s difficult to say exactly why. ‘The Blinking of the Ear’, in four parts, is a piece originally written for piano, then arranged for mezzo-soprano AnnMarie Sandy and ensemble as part of Parker’s ‘Healing Songs from the Tone World’ performed in January 2017. Due to sound problems, that recording could not be used, so Parker arranged the piece for voice, piano (Eri Yamamoto) and drums (Leonid Galaganov), recorded the following month. Sandy has a light voice, heard to good effect in her elegant renderings of songs by Ravel on her website, but she seems ill-suited in this setting. The vocal line suggests a bigger voice which opens out more whereas Sandy sounds too timid in this context. It’s possible that the support of a larger group would not leave her voice quite so exposed and provide a more sympathetic environment, but I’m afraid the piece just doesn’t work here.

The remainder of the third disc consists primarily of edited versions of previously released material., with largely the longer instrumental passages having been excised. I’m unsure if the pieces benefit from such reduction though the revised versions do provide the chance to sample the full ambit of Parker’s vocal music with larger groups – Ernie Odoom fromEssence of Ellington (Centering, 2012) andWood Flute Songs; Sangeeta Bandyopadhyay from Double Sunrise Over Neptune (AUM, 2008); and Leena Conquest and the Kitchen House Blend Ensemble in ‘For Fannie Lou Hamer’ from For Those Who Are, Still. The final track is Conquest with two cellos, two violins, bass and drums. in the full version of ‘Natasha’s Song’ from Alphaville Suite: Music Inspired by the Jean Luc Godard Film (Rogueart, 2007), a vision of the redemptive power of a poetic sensibility, a recurring theme throughout Parker’s lyrics, often expressed through metaphors of light and the cleansing power of rain – “holy light”, “tears fall down like rain”, “let the light shine within”, “falling rain light” – and visually, Lois Eby’s ‘Raining’ paintings on the front and back cover.

On CD1 (‘Voices Fall from the Sky’, another allusion to rain), apart from the opening incantation the material is new with all but one song taken from sessions recorded between December 2017 and January 2018. None of the vocalists has recorded with Parker before and there’s an assorted mix of forces and interpretive styles. Raina Sokolov-Gonzalez, who has a delightful melismatic quiver, accompanies herself on piano in two songs. In contrast ‘City of Flowers’ features Andrea Wolper, Karen Borca (bassoon) and Masahiko Kono (trombone and electronics) in which Parker’s lyrics initially provide a jumping-off point for free improvisation, followed by delivery of the final verse as a chorale.

The disc also features some medium-sized groups and expansive interchanges between voice and band. Parker allows his words and music to lock in a way that enables greater movement in the instrumental parts without disrupting the vocal line. Everything is anchored by an elementary structure, often a repeated figure sounded out on his muscular bass. Like Mingus and Howlin’ Wolf, he builds from the ground up. ‘Bouquet for Borah’ is dedicated to the late Borah Bergman’s “new classical jazz sound”: Wolper and a quintet featuring two alto saxophones (Dave Sewelson and Rob Brown); all three stretch out in the middle section. During ‘We Often Danced’ Fay Victor’s recitation slowly moves into song as her voice intertwines with two violins, alto sax, bass and trumpet over a shuffling beat, gradually picking up pace as the dialogue becomes denser. On ‘Voices Fall from the Sky’, Amirtha Kidambi’s blustery enunciation, Steve Swell’s earthy trombone and Jason Kao Hwang’s floating violin seem to occupy distinct but related spaces, bound together by Parker’s palpitating bass. The disc ends with ‘A Tree Called Poem’ a twilight world portrayed by the haunting Morley Shanti Kamen accompanied by Parker’s fragile strumming on a 6-string donso ngoni, a harp from Mali: “A light called poem / A tree called wind / Is the house where the Lord resides”.

Reflecting on this collection, we have a richly varied tapestry – the spiritual affirmation of gospel music and irresistible groove of blues and soul; the breezy swing of Ellington and Mingus’ propulsive drive; cyclic refrains from African music and the ebullience of Township; and the energy and spontaneity of free jazz. Under Parker’s supervision, it feels like ultimately, they all come from the same place in a celebration of diversity and deep undercurrents, music keen to shape continuity with people, places and the past and suggesting that some of the musical divisions we make might impede the freedom declared in the title track:


“Let the sun rise in your soul
Voices fall from the sky
Bringing hope and love to the world
This is why we sing
We sing because the world needs freedom.”


The set is available to order or download from Bandcamp.