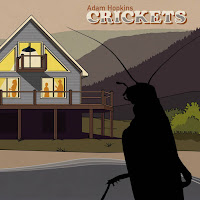 
Crickets is the new album from bassist and composer Adam Hopkins and features a sextet with Anna Webber, Ed Rosenberg, Josh Sinton handling various saxophone duties (and bass clarinet), Jonathan Goldberger on guitar, and Devin Gray on drums. Crickets is also the first release from Out of Your Head Records, a new label formed by Hopkins, TJ Huff, and Nick Prevas.

The music dips and dives, cruising down a long highway, taking tight turns at break neck speed. The music grooves on a deep level, congealing into a perfect late season pie, while still maintaining a noisy, thrashing, flaky upper crust. From the opening circular melody of “They Can Swim Backwards but Sometimes Choose Not To” built upon a deadly groove to the distorted madness of “Scissorhands,” the band plays with forceful conviction, shattering ear drums and taking no prisoners.

A solid album, highly recommended, well worth your time. Hopkins joked on Twitter that he named the album Crickets because that’s the response he was expecting to the album. It’s certainly difficult to sell this kind of music to a wider audience and we all know what kind of response this music usually gets in the press, but enough crickets collectively can make a deafening din, so chirp chirp.

A quick Google search reveals that the album has so far received four reviews (including this one), all of them positive. Given the zillions of albums released each year that’s pretty good going. As I understand it, the chirruping sound of male crickets is a mating call, which might also be considered positive.

Undoubtedly, Adam's comment was mostly a joke. 4 reviews is a beyond stellar response.

Haha, yeah unlike some of our political leaders I have to watch what I say on Twitter! Definitely a joke--I have been so happy with the response to this record, and really appreciate people like David taking the time for such a close listen and thoughtful review. Thrilled to be featured on my favorite blog for creative music!

I thought it was a tip of the hat to Buddy Holly?