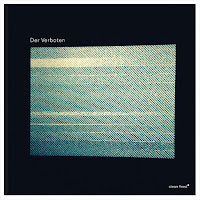 Der Verboten is a new ensemble of Frantz Loriot on viola, Antoine Chessex on tenor, Cédric Piromalli on prepared piano and Christian Wolfarth on percussion. The only track on the album is called "Der Dritte Treffpunkt" (the third meeting point), because it's the third collaboration between Loriot and Piromalli.

The band performs at the center of the audience, or surrounded by it if you want, with the amplifiers behind the audience, making the audience more part of the performance than in a usual set-up. All instruments are amplified, and amplification is used when the musician thinks it's needed.

The music itself is characterised by an intense openness. The notes and sounds are reduced to mere granular ingredients to create a broader collective canvas with lots of white space. Somehow, because of timbral explorations, the small nuggets of sound contain minimal emotions, possibly insufficient on their own to impress, yet when listened to collectively, it resonates. You can call it organic, as the sounds grow from the bottom up. You can call it atomic, as the sounds bounce of each other like electrons, protons and neutrons. You can call it liquid, as various streams whirl and eddy in turbulence yet flow in the same direction. You can call it the sonic representation of quantum physics, where it becomes unclear whether matter consists of particles or waves, even as the intensity and the volume grow. Inevitably, the small drops become rivers, the seeds become plants become trees. So it is here, as energy and density increase.

But it is exactly in this fine energy of hard to define sonic particles, of the dynamic interaction of raw minute sensations that something larger comes to live, a sound edifice that is both alluring and alienating, inviting and confronting.

There can only be one track on this album, because there is no need for another approach. The music grows on the listener, and possibly the listener grows in the music. You can turn it off if you don't like it - which is fine - but when you keep listening till the very end, you will like it. And I'm sure you will listen again, and again.