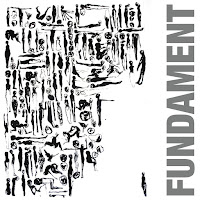 The band are Peter Jacquemyn, Yannick Peeters, Kristof Roseeuw, Lode Leire, Pieter Lenaerts on double bass, Erick Sleichim on tubax, Jan Pillaert and Carl-Ludwich Hübsch on tuba, Matthias Muche on trombone, Gregoire Tirtiaux and Mathieu Lilin on baritone saxophone, and Peter Verdonck on bass saxophone. Several of the musicians add their vocal capacities, especially the leader who is versed in Mongolian tuva chanting. The band is unusual, to say the least.

Jacquemyn's endeavour is to bring something foundational, not only literally by creating a deep and overwhelming bass ensemble, but also at a deeper, spiritual level, namely to feel the vibration of life, feel the resonance in a real physical sense. I had to the pleasure to assist one of the performances in the Saint Jacob Church in Ghent, where the band occupied the larger part of the church floor and moved forward and backward, walking behind the massive pillars, come close the audience, and creating distance again, sometimes all together, sometimes with musicians moving in different directions according to a beautifully orchestrated choreography. This amazing physical aspect of the performance can of course not be experienced on this album, and that's a shame, really.

Below, I share two excerpts of the concert to give an idea of the performance. Recorded with iPhone, so apologies for the lack of quality and stability.


Back to the album: first, it has been quite a feat to capture the essence of the performance on record, even if you do not experience the full resonance of the space, you get dragged into this wonderful and special sonic universe, one that offers both the calming effect of single tone mantra-like bass voices with the more terrifying sounds of interjected screams or instruments. ... or the magnificent moment of complete distress on the short "Blow".

"Fundament B" is less linear than "Fundament A", and starts with a multitude of bowed basses conversing, in dark, ominous tones, as it evolves into a stop and go game between the basses and the trombone, or the collective versus the individual, until a much deeper groundswell by the horns takes over, in a strange contradiction of massive minimalism, something that is both solid and simple, but with enough variation to keep the tension going.

The album ends with "Earth", a monotonous chant with the whistling tuva sounds shimmering over deep bass voices, sounds that come from the core of the earth and connect us with the things on it, disrupted by savage growling sounds of Jacquemyn.

The album is not as strong as the actual concert - and how could it be? -  yet it captures the essence well. It is offers an amazing listening experience, a work of art full of creativity, audacity, intelligence and something deeply foundational.

Listen and download from Bandcamp. Equally available in vinyl.