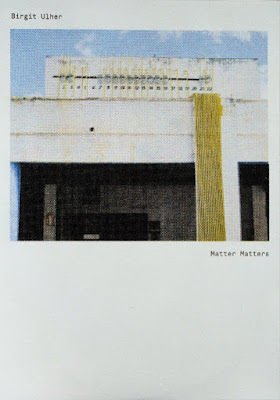 On Birgit Ulher’s latest solo album, Matter Matters, she has recorded a bold and vital interaction with the world as it is. Which of course, in her hands, means a set of works that are alive and crucial, by alternating moments of discomfort with a sense of stability, creating a sound world that remains distinctly Ulher-ian, for lack of a better descriptor.

There is nothing sly or understated about the opener, “Traces.” Composed for trumpet, radio, speaker, objects, and tape, “Traces” uses as its source material measurements taken in the Chicago and Elbe rivers. Starting with source data for each river’s oxygen, nitrate, phosphate, and e. coli contents, Ulher assigned each of these a physical material to be recorded: marble, tins, wire whisks. Sounds and rests are dictated by the measurements, which represent the four “traces” of the title. The resulting tapes alone would be enough, possibly, to make a point, but Ulher’s does far more with the concept, her trumpet serving as both commentary and experiment, measuring the impact of a human’s impact on this aquatic scale.

“From Die Schachtel” is a composition by Christoph Schiller, with whom Ulher has an ongoing creative duo, derived from a set of text fragments, graphics, and other conceptual materials Ulher refers to for constructing the performance. Interestingly, the source of the text fragments is reporting from two 19th-century polar expeditions, which conceptually extends Ulher’s dialogue between herself and the external world. In this case, her trumpet interprets a farther past, a state of the world we can never return to—and may not desire to, at any rate. Like the writing of B.S. Johnson, the material the comprises “Die Schachtel” can be assembled in any direction, as the liner notes state, “The score collection presents a self-contained cosmos.” Ulher, a master of form and structure, performs splendidly, and the composition is intriguing enough one wonders what a set of three or five realizations might play like.

The final track, “Splitting 21,” utilizes both splitter and tape, two objects Ulher has previously used to great success. The composition was co-written and recorded with one of her regular collaborators, cellist Michael Maierhof. Opening with a set of bright, clear notes set against pops, crackles, and airy stops, “Splitting 21” is at times a disorienting listen, given that Ulher is perhaps an underrated player of silence. Her trumpet tone is majestic and bright throughout, but it’s her dramatic playing of rests that deepens this particular performance. I’ve often thought of Taylor Ho Bynum as a kind of heir of Ulher’s, but she’s a bit less reliant on motif building than he has typically been. However, they both play with a uniquely physical sensitivity to space. As “Splitting 21” ends with a brief, crisp whole tone, there is, as there often is with Ulher’s recordings, a definite feeling that a bridge has been erected between listener and performer. For despite being an avant-garde or experimental performer, Ulher is also entirely human, her concerns timely and true, and listening takes more than pressing play: it’s up to us to hear.
Paul on Saturday, December 01, 2018
Share

Thanks for the review Lee, I've not heard this yet. Anne Guthrie reminds me of Ulher, you can definitely hear her influence anyway.

Thanks, Nick. I agree with you about Guthrie, and I think the same is true of Liz Allbee.