Kammerflimmer Kollektief - There Are Actions Which We Have Neglected And Which Never Cease To Call Us (Bureau B, 2018) ***** 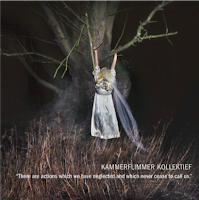 Kammerflimmer Kollektief is one of my all-time-favourite bands. Three years ago I praised their last album Déssaroi as their best so far, I even called it a masterpiece. Revisiting it now, I’m still fascinated by it’s psychedelic atmosphere, the angular, atonal improvisations, and their “free ambient“ approach in general. The bar for a new album was set really high.

Kammerflimmer Kollektief is still Heike Aumüller (harmonium), Johannes Frisch (double bass) and Thomas Weber (guitar, slide, electronics, loops), There Are Actions Which We Have Neglected And Which Never Cease To Call Us is their tenth album in 20 years - and while Dessaroi was their freest album, this is their darkest one. Aumüller’s vocals are gone and Frisch’s bass is less free this time, he rather contributes to the overall gloomy atmosphere. The seven tracks refer to different cities around the world, many of the pieces deal with death, dysfunction and decay. Imperial City and Bolinas are both in California, the first a surfing stronghold and the setting of the surf noir series “John from Cincinnati“, the second the place where Richard Brautigan, one of Weber’s favourite writers, died. Quauhnáhuac is a fictitious city in which Malcolm Lowry’s “Under the Volcano“, a novel about self-destruction, takes place. Ermenonville in France is famous for its landscape park named after Jean-Jacques Rousseau, who spent the last six weeks of his life there. Hamburg is a reminiscence of Bernd Schoch’s documentary about the corner pub “Kurze Ecke“ in St. Pauli, which has closed in the meantime (the band has written the theme song for the film).

The key track of the album is the first one, 'Lucid, Imperial Beach', a perfect example of the juxtaposition of beauty and chaos in Kammerflimmer Kollektief’s music. The piece starts with an unpleasant scratching in front of a dark drone, which leads into a guitar feedback. Then the track almost dies, but it starts again, this time with a simple melancholic melody on the harmonium combined with atonal guitar strumming. After six minutes one of Weber’s typical slide guitar riffs appears, for a short moment a certain loveliness becomes audible, but not for long. Aumüller plays atonal patterns on her harmonium, Frisch just knocks on the strings and the body of his bass, Weber scrubs erratically on his guitar. Nevertheless, the ending is rather conciliatory, because the slide guitar riff turns up again (it’s the leitmotif of the album, returning in two other tracks as well).

There Are Actions ….. is like a retrospective of Kammerflimmer Kollektief’s works, a summary of how they transform styles - as German critic Felix Klopotek puts it: blues becomes doom, folk becomes new music. The boisterous free jazz approach is suspended in ambient sounds. This could end either in cheesy sound painting or in intellectual, oblivious conceptualism, however it’s of the utmost warmth, emotion and clarity because their structures are transparent and crystal clear. One reason for this is the fact that Kammerflimmer Kollektief’s music is very recognisable, Thomas Weber’s guitar sound and Heike Aumüller’s harmonium are unique in their combination.

There Are Actions ….. is grave, comforting music that takes you by the hand and can lead you through the jungle of your soul. Kammerflimmer Kollektief’s compositions are an intense implosion, a deep melancholia, in which free jazz is just an echo of a different time.

One last word about the excellent artwork: Most of their album covers are designed by Heike Aumüller, often they are in the tradition of artists like Cindy Sherman recalling a long tradition of self-portraiture and theatrical role-playing in art. The cover on There Are Actions … is new (but on the basis of an older picture), it reminds me of the first season of the series “True Detective“. Like the music it’s beautiful and unsettling at the same time.

There Are Actions Which We Have Neglected And Which Never Cease To Call Us is available on vinyl, as a CD and a download. You can buy it here.

Funny. My immediate association when seeing the cover was "True Detective".