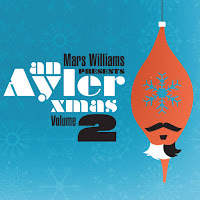 Last year, Mar William's released Volume 1 of An Ayler Xmas, this year, the saxophonist has followed up with Volume 2, which is another celebratory mash up of holiday music delivered in the style of Albert Ayler and with reference to his signature melodies.

Unlike the first volume that was recorded with his Ayler tribute group Witches and Devils from Chicago, Volume 2 is comprised half from a European version of the band, with the tracks pulled from a date in Vienna. So for half the album, joining Williams is cornetist Josh Berman, cellist Fred Lonberg-Holm, keyboardist Jim Baker, bassist Kent Kessler, multi-instrumentalist Brian Sandstrom, and drummer Steve Hunt, with a guest spot by trombonist Jeb Bishop. On the the other half, we have trumpeter Thomas Berghammer, bassist Hermann Stangassinger, drummer Didi Kern, and electronics wiz Christof Kurzmann.

The album begins with the 15 minute "Xmas Medley" in which we hear piano, cello, guitar, and drums in a royal rumble while the horns play with fanfare flare. The band switches between searing solos and traditional and not so traditional holiday songs, like the quote from the Waitresses ear-worm "Christmas Wrapping". Here, Jeb Bishop's trombone solo stands out, floating over the roiling undercurrents and weaving around the song quote studded accompaniment. The track breaks down in the middle and small instruments, like the finger piano, or forlorn calls from the bass, cry out from the void. The mood changes from bleak to hopeful, as there is a chorus from "Frosty the Snowman" followed by a chorus from a traditional tune, which finally pulls the group back to its feet as they go out in squelching triumph.

The next track, "O Tannenbaum - Spritis - 12 Days of Christmas" features the Vienna band. The mix of the two bands is noticeable at the start. Someone, possibly Kurzmann (who is credited with vocals), speak/sings the lyrics of "O Tannenbaum", first the original German version, then after an instrumental passage, the socialist anthem version known as "The People's Flag". Then, the group launches into Ayler's 'Spirits' and quickly gains momentum, showing the same enthusiasm and grit as their American counterparts. They reach a collective peak as Williams and Berghammer take off in different directions. William's wraps up the track with a fiery cadenza, stark against a silent backdrop, and signals the closing moments with a piercing note.

We're then brought back to Chicago, track three being a medley of "Love Cry" and "Christmas Wrapping" (the quote returns, this time growing and multiplying). Track four is an epic "Carol of the Drum - Bells - O Come Emmanuel - Joy to the World". The closing track brings us back to Vienna for a mashup of Ayler's "Universal Indians" and "We Wish You a Merry Christmas", featuring Kurzman's lloopp, a heartfelt solo from Williams, and a the refrain "we wish you a merry Christmas" and, whispered with an Austrian accent, "a happy New Year".

Volume 2 is another successful installment of Christmas and Ayler cheer. Whether you are tempted to pull it out between the holidays remains up to your feelings towards the songs out of their temporal context, but with the sheer musicianship and spirited deliver makes it a real possibility. Regardless, William's Ayler/Xmas concept remains strong and holds up well against international travel.