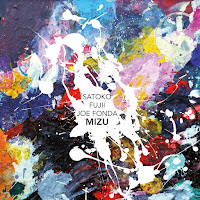 A long time ago, a friend introduced me to the music of Satoko Fujii. He loaned me a few albums and, at first listen, I immediately realized I had been missing out on something special. Fujii is thoroughly contemporary in her mastery of styles. She combines and configures influences unpredictably and seamlessly. And, she does so not for the sake of novelty, but, it seems, because she perceives some common emotive or harmonic thread uniting the musical forms. Accompanied by the venerable Joe Fonda, Fujii is as nimble and inspired as ever on Mizu, a live recording capturing two nights – one in Belgium and one in Germany – in 2017.

The first track, “Rik Bevernage” (an homage to the late Belgian music promoter), begins with isolated piano and bass tones that quickly gather into a tempest of wild, running melodies and abstract pizzicato. Around nine minutes in, Fonda steers the song into bluesier territory as Fujii supports the pivot with a soft, loungey melody that soon tangles into an angular flourish of augmented scales. As she finishes this statement with a prolonged, dark chord, Fonda lays a tapestry of delicate plucks and bowing to which Fujii responds with her own exploration of the piano’s interior. By the 20-minute mark, the track really begins to pick up steam. Fujii returns to her keys and Fonda adapts in kind, drawing a solo into a distorted harmony with the piano. The track ends in a prolonged crescendo and intensification, then a walking bass groove over which the piano, for the first time, waxes jazz.

The second piece, also from the Belgian concert, is equally engaging, though quite unique. This track is shorter and seems more directed than the first. It is founded on the gradual realization of an emergent, driving rhythm repeatedly traded between and reinterpreted by Fujii and Fonda.
The third track, “Mizu” (Japanese for “water”) is a different beast altogether. It starts quietly and contemplatively. Fujii takes the lead, teasing potential melodies as a Fonda plays intermittent arco. As much as “Rik Bevernage” was about rather skillfully combining musical languages and generating an immediate and lasting impression, “Mizu” seems focused on the process of musical creation. The track builds then retreats as water ripples (hear the ripples six-and-a-half minutes in) when touched by the wind or any other minor disturbance. The piece gathers speed as Fujii plays a glistening melody and Fonda, rather than simply following, out-paces her at points. Fonda continues with a stunning solo as Fujii deploys some percussive scrapings and rattles in support. Then, Fujii steps up again. At later points, Fonda contributes howling vocals and flute, adding the wind and air that had hitherto been only hinted in the rippling. And it is here, as the wind finally reveals itself, that the water stills and the track slowly fades.

This album is characterized by this type of give and take, this frequent exchange of the lead, this strikingly even balance rarely struck in a duo and even more rarely achieved between a bassist and pianist. This is beautiful music not just because of Fujii and Fonda’s virtuosity, but because of their delicate interplay and mutual responsiveness, their raw intimacy, and their almost frenetic creativity. I have not followed Fujii as closely as I should have during this past year of relentless performances and releases. Nevertheless, I am certain that this album holds its own among the others. Whether you are new to Fujii (or Fonda, for that matter) or a seasoned listener, Mizu will not disappoint.