Not too much of an in-depth analysis, this time, just a quick overview of trumpet-bass duos released this year. An unusual format, but when brought to us by the best musicians, things can hardly go wrong. 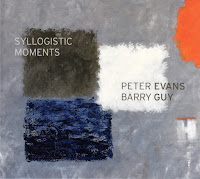 Here is what Barry Guy writes of this concert:

"Peter Evans and I have occasionally met in larger ensembles for special projects. This particular concert in Uster (Switzerland) within the PAM festival on 18. November 2016, allowed us to delve into the minutiae of duo performance where intense listening and decoding of intentions kept our minds and bodies in high alert. This occasion had us playing somewhat athletically, pushing and pulling ideas around, and to be honest, we both felt exhausted after the concert but also exhilarated. The joys of improvisation I guess…. and high speed communication".

It is an athletic performance indeed. Peter Evans is one of the leading voices on trumpet today, demonstrating new possibilities, timbres and musical exploration. The British bassist needs no further introduction. Both are very audacious musicians, extremely disciplined in their technique combined with extreme rebelliousness in their sound. A rebelliousness that is not only directed at destroying existing norms, but equally, and probably even more so, to show new creative options, new possibilities of sonic exchanges and impact, but then at a rare level of abstraction.

This is very headstrong music, without any compromise to the listener, and that's how we like it. That's how borders move, how frontiers of expectations get expanded.

A more in-depth analysis can be found in Colin Green's review of the same album. 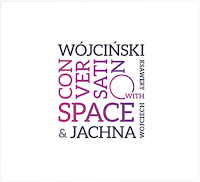 Three years ago, this duo released its first album, called "Night Talks", offering an intimate overall sound for listening on quiet evenings. On their sophomore album, the intensity is a notch higher, with more attention to musical creativity. Wojciech Jachna is known to us and reviewed before, especially for his collaborations with drummer Jacek Buhl. So is Ksawery Wójciński as a frequent member of the new Polish jazz scene, often reviewed here, in the company of Charles Gayle, Agusti Fernandez, Waclaw Zimpel (I suggest readers to use our search engine for more information).

The main inspiration for both musicians comes from nature, with track titles such as "Sky", "Stars", "Waterfall", "Stones", "Lake", "Wind", "Dust", "Cloud", which suggests the impressionist approach by the artists, and indeed with the titles in hand, it is easy to imagine the music as an artist's reflection of nature, or an accompaniment of the pictures that unfold before your mind's eye. The tracks are short and concise, making a musical point with little development and without long excursions.

Two track titles are more human: "Song about Saint Wojciech Bishop and Martyr" and "Citizen Of The City". The first is an amazing piece, a Polish traditional, a duet of bowed bass, overdubbed and polyphonic, and offering a wonderful classical sound with jazzy influences, especially in the crystal-clear trumpet part, reverent and solemn, in stark contrast to "Hurricane", the angular and raw subsequent track on which guest saxophonist Tomasz Glazik joins.

"Dust", the shortest piece, is for bass only, both bowed and plucked, and uncanny despite the fact that it's only one minute long. It shows the inventiveness of both musicians: to deliver very compact and intense, imaginative and varied little pieces of music, that all have their own character and recognizable nature.

The album ends with the most sensitive and human piece, called "Citizen Of The City", a beautiful closing for a strong album. 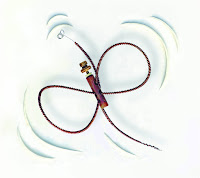 Also from Poland comes this equally strong duo album with Tomasz Dąbrowski on trumpet and Jacek Mazurkiewicz on bass. Mazurkiewicz released albums with Wojciech Jachna before, and is member of the Modular String Trio, and he also released a solo album, all reviewed on this blog.

Dąbrowski is probably better known, and has been reviewed extensively over the years, both with Polish and Danish ensembles. This duo, just like the previous one, demonstrates again why Polish jazz is so "hot" these days. The instrumental skills of both musicians are exceptional, and to hear them use these skills with cleverness in a free environment of an open dialogue makes it even stronger.

If the Jachna/Wójciński album is more focused on a co-creation of impressionist improvisations ("a conversation with space"), the Dąbrowski/Mazurkiewicz duo is more a conversation among the two musicians themselves, challenging each other, listening well, joining and collaborating, more interested in creating new sonic adventures than in a common sound. The performance was recorded in the Basement of Fort Sokolnicki in Warsaw, 18 October 2015.

It does result in some beauties, such as "Pickled Cucumber", which starts with a long intro of solo bowed bass, and ending with Dabrowski adding only six notes to the piece. It also results in madness, as in "Something Fermented", on which the use of electronics adds a kind of weird intensity, or "An Ant Lobotomy", where Dabrowski explores the sonic vocabulary of his horn.

... and the exploration progresses into deep uncharted territory in the next few tracks, going further and further away from their base camp.

Mazurkiewicz says: “I’m inspired by people, situations, places, colours, scents and by other things related to my life. Lots of melodies and musical structures pass through in my mind quite quickly... Some pieces are inspired by sounds of a city; others are connected with places and people.”

It's great to be part of their adventures. 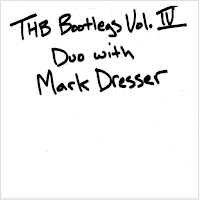 I hope that Taylor Ho Bynum will excuse me for putting a cornet among the trumpet review section. This album is one in an ongoing series of so-called bootlegs, which is of course not entirely true, because released by the artists themselves. Like the first solo album in the series, this one was also recorded at the Acoustic Bicycle Tour, recorded September 29, 2014 at Saddleback College, Mission Viejo, CA. The "Acoustic Bicycle Tour" is an artistic project by Taylor Ho Bynum, set up to perform with the musicians he encounters on his bike rides:

"The Acoustic Bicycle Tour is an ongoing performance journey where I travel solely on bicycle, presenting solo concerts and playing with ensembles of area musicians. I see the entire trip as a kind of composition. Like all my music, it looks to combine the predetermined, indeterminate, improvised, intuitive and structured into an organic whole. The endeavor is an act of composition, a performance art piece, a philosophical statement, a celebration of musical community, and an exercise in extreme physicality. For me, there are clear analogies between choosing to travel by bike and choosing to pursue a career in creative music: the trip may be slower and more arduous, but it is ultimately more rewarding in its acoustic pleasures and unexpected delights".

Knowing the artistic talent of both Taylor Ho Bynum and Mark Dresser, this 'bootleg' is one to listen to. The interaction is as can be expected: creative, intense, intimate and deep. Some pieces start with a musical or even thematic concept, others are complete improvisations. Some are full of drama ("To Wait"), with low tones and bowed bass, others are full of joy and fun ("Coyote"), or even jubilant ("Coming On/For Bradford").

An absolute joy, this album. Don't miss it.