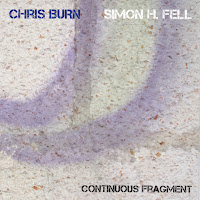 Star ratings also reflect the length of the album, and if this album was longer, the rating may have been higher. The duo fo Chris Burn on piano, and Simon H. Fell on double bass already dates from improvisation they gave in January 2010, but these twenty-three minutes of exploration have become published only this year. Burn is more active on the inside of his piano than on the keyboard, using a variety (of unspecified) objects to work its strings, by plucking, rubbing, scraping, caressing, marbling (?) and hammering, all movements that create sounds that work amazingly well with Fell's bass. Even if initially the sonic bits are investigating and colliding and sometimes hesitant, gradually a wonderful collective sounds emerges from this, sensuous and ominous, subtle and refined, which is masterfully changed in the last two minutes. And then it suddenly stops. Twenty-three minutes is short. But well, then you listen to it again.

Hmm, what an odd review. I had no idea that duration of a recording affects a rating at FJC.

So, how many stars does a recording get per minute of release? Also, do the number of players on a recording also affect the rating? And how about the review: the longer the review the better the reviewer?

The value of FJC is the opinion of reviewers on whether something is a quality piece of music, usually compared to other pieces of music. Surely, number of participants, instrumentation, method of release and....duration, are irrelevant.

Well, if nothing else, it’s made me want to listen to it!

Hi Richard, I agree that it shouldn't, and I have given 5-star ratings to EPs, but 20 minutes is really short. It's a value judgment. I hope you enjoy it, nevertheless.