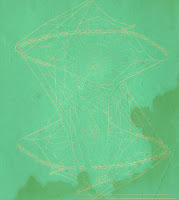 "Gossamers" is a free improvisation album by two young Australian musicians: Rosalind Hall on alto saxophone and Judith Hamann on cello. Both explore timbral variations and interaction on a drone-like monotonous foundation, resulting in a wonderful shimmering sonic landscape, as its title suggests. The unrelenting weaving of single tones from the two instruments, and especially the vibrations and flageolets result in a strong listening experience, where psychophysical effects are generated in a very deliberate way. Some will call this noise, because there are no patterns, melodies or rhythms to be discerned: there is nothing but shimmering sound, but then of a fragility and vulnerability that is so precious, that all other so-called music is noise by comparison, or blunt, brutal and superficial. This is music that requires the utmost concentration and listening skills and self-control from the musicians, as well as close attention by the listener.

Their music builds on both modern classical music as well as the AMM legacy, Kim Myhr, Ingar Zach, Jim Denley and Xavier Charles. And somehow, despite the monotony, you don't want this to end. It's that addictive.

I hope we will hear much more of both musicians in the future.