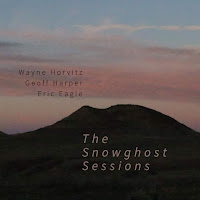 Amazingly enough, this is the first piano, bass and drums trio that Wayne Horvitz ever recorded, despite his long career as a musician. Geoff Harper plays bass and Eric Eagle drums. The performance was recorded in 2015. Horvitz adds amplified piano, live processing, Wurlitzer electric piano, Hammond B-3, Nord Lead, TX-7, and Mellotron in his playing, even if the majority of the music is performed with acoustic piano.

Of all jazz pianists, Wayne Horvitz is possibly the bluesiest, in tone at least, and then he manages to compose such wonderful lyrical themes and melodies, adding a strong flavour of American more traditional music with a kind of cinematic soundtrack touch to it.

Horvitz has had many musical bifurcations in his career, from the classical avant-garde with his Gravitas Quartet or his "55 Music and Dance in Concrete", over free improvisation with with Butch Morris and William Parker and the rhythmic modern jazz of Pigpen, to the more accessible bands such as Zony Mash and Sweeter Than The Day. The music on this album is mostly close to the last two bands, which play the same sweet bluesy melodies, the first in an electric band, the second in an acoustic version, but with the same musicians.

Some of the quieter songs, seem to come from Sweeter Than The Day albums, even if the titles are different. There are some contrasts such as "IMB", which brings a violent attack on your ears with fully distorted sounds coming from Horvitz's electronic equipment. And the sweetness is often pierced by unusual sounds, such as in "For James Tenney".

This is music for dreamy evenings, quiet and nice next to the fireplace, away from the cold and the rain. It is guaranteed to warm you up inside.

The youtube track below is vintage Horvitz. Play it anywhere, and anybody with any knowledge of Horvitz's oeuvre will identify its author and performer immediately.