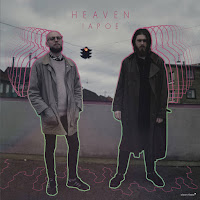 Heaven's debut album, IAPOE, titled as an abbreviation of the first letters of the five pieces - Is-A-Place-On-Earth (a title that echoes Laurie Anderson’s opening lines of her iconic song “Language is a Virus”: Paradise / Is exactly like / Where you are right now / Only much much / Better”), was recorded in Copenhagen’s district Vanløse in September 2017. IAPOE presents the first phase of this working duo while the duo is preparing its next one, a Scandinavian tour with trumpeter Nate Wooley in the beginning of 2019.

Heaven's music, as you may expect, is fast, dense and super-energetic, rooted in old and newer schools of free-jazz and free-improv from both sides of the Atlantic. But Heaven adds an interesting twist to the sax-drums format, introducing a sensual, playful Ethiopian vein to its muscular and urgent interplay, and intertwines fierce, powerful attacks with melodic call-and-answer themes. This kind of Ethiopian singing vibe sneaks naturally into Heaven’s explosive energy and spin the restless, in-your-face Albert Ayler-ian love cries back to Eastern Africa and back again to Northern Europe.

Pultz Melbye sets the tone of all the pieces with an authoritative and articulate flow of ideas and gestures, while Mofjell plays all over, often sounding like he's tapping into the infinite energy fountain of fellow Norwegian drummer Paal Nilssen-Love. The two best pieces here are the quiet and lyrical “Place”, which sounds like a humble homage to to the irresistible, big and warm singing sound of late Ethiopian sax player Gétatchèw Mèkurya, and the 15-minutes free-jazz piece “On”. The latter piece has uncompromising Brötzmann-ian manic qualities, pushing tougher and wilder and then some, as this duo proves again and again that it is well-versed with the fast lane to the earthly heaven.

And some more here.