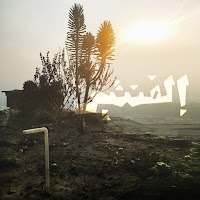 Sun Ra and his Arkestra visited Egypt in 1971, recorded three albums including one with local drummer Salah Ragab, and, obviously, visited the Pyramids where Sun Ra had another one of his unbelievable, psychic experience. According to Sun Ra (as quoted in John F. Szwed biography of Sun Ra, Space Is the Place), while he was in the King’s Chamber at the Great Pyramid, Sun Ra chanted nine times the word Ra - the ancient Egyptian deity of the sun. Then, suddenly all the lights went out, but Sun Ra managed to lead his party in total darkness through a twelve-story high staircases and through the narrow entrance to the Queen’s Chamber where the lights miraculously came on again.

Egyptian, Cairo-based guitarist-pianist-multi-instrumentalist Maurice Louca - known from the Middle-Eastern super-group Karkhana and other alternative groups as the Dwarfs of East Agouza and Lekhfa - was born a decade after the historic visit of Sun Ra, but like the great master from outer space he leads a large ensemble that feels at home in experimental-cosmic jazz territories. Louca spices his own cosmic-psychedelic vision of jazz with sensual Arabic scales and West-African and Yemenita trance-like, minimalist rhythms. Elephantine, his third and most ambitious album so far, suggests meditative themes and melodies about a better, peaceful world, but allows the listeners to stick to the dancing habits of the current, old world.

“The Leper”, that opens Elephantine, establishes the hypnotic groove of this album while repeating psychedelic-spiritual jazz mantras, but ornaments the infectious pulse with Middle-Eastern percussion instruments. The short “Laika” dives even deeper into the sixties and seventies spiritual free jazz, now coloring the brass choir with sensual-angular Middle-Eastern voices. “One More for the Gutter” confronts Louca’s gentle and breezy, West-African guitar lines with the hyperactive, fiery free jazz ensemble. The most beautiful song here, “The Palm of a Ghost”, is a return to Louca’s musical roots in Cairo, featuring a delicate, chamber strings-based arrangement with the suggestive delivery of El Shazly and oud player Natik Awayez and violinist Ayman Asfour. The title-pieces deepens the meditative-dreamy atmosphere of the previous song. “Al Khawaga” concludes Louca exotic journey with a different option of playing with colossal, repetitive groove, still, dancing and swinging sensually.

Maybe Sun Ra has not left our fragile planet but keeps transmitting his enlightening messages from the Great Pyramid?

Amazing! This is innnovative music, based on middle eastern themes with lots of free blowing over the top. Louca is a genius! The Sun Ra comparison is apt. I give this the recording of the year award!