We received an unusual guest contribution for guitarist Wolfgang Muthspiel's latest ECM release Where the River Goes. The writer, Marinella Barigazzi, offers a poetic take on this music, capturing in words images of the sounds flowing from the speakers, plus adds some additional words from the guitarist.

Where The River Goes 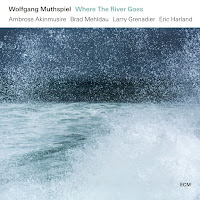 It flows slowly, from the source to the rock.

It passes by moss, it echoes in the valleys.

It captures the tenuous light of the dawn and sends back its sound.

Between light and shade, it flows through the forest, caressed by ferns.

The notes rise high up, to greet the rays of the sun.

Notes that call other notes, that intertwine, that separate, that exchange smiles.

Then suddenly it increases rhythm, sending out spray and vigour.

It intersects far away voices and creates of them icons, colouring them with passion.

It proceeds with small steps and opens its sound to the hand of the wayfarer.

It wisely skims over vibrating chords playing arpeggios in the gleam of the sunset.

The river is here.

The river is music.


Wolfgang Muthspiel about the disc:

Each song has a different inspiration. "Where The River Goes" is inspired by Brad Mehldau (a certain part in a Duo record with Joshua Redman).

"For Django" is inspired by Django Bates (the way he treats his middle voices in his arrangements).

"Descendants" is inspired by my experience of recording Rising Grace.

"Buenos Aires" is inspired by Guillermo Klein and a week I spent with him in Buenos Aires (he has become an important musical friend and partner).

"One Day My Prince Was Gone" is inspired by Miles Davis (both the Standard "Some Day My Prince Will Come", and his absence).
"Panorama" is an improvisation, inspired in part by Eric Harland's drumming.

How does it feel to play with such a great musician as Brad Mehldau?

It is a luxury to play with Brad. I would say that the mark of the truly gifted musician is the balance of control versus openness for the moment. Both are vital to good Jazz music. In Brad that balance is perfect. Mastering music at this level is hard, but being open to whatever happens and contributing exactly those notes, which make the music better, is rare.
_____

Where the River Goes is not a free jazz album, rather it's well composed and fits the ECM aesthetic swimmingly. Like his fellow guitarists on the label, such as Jakob Bro and the late John Abercrombie, the strongest musical element is the crystalline balance of tone and timbre with motion and momentum. While the album is Muthspiel's, trumpeter Ambrose Akinsmusire whose invigorating and  propitious playing is star material.

On the track "Blueshead" for example, the group gets into a fairly strident groove and Akinsmusire adds an extra bit of bite, while on the opening title track, his entrance after a gentle lovely build up is exquisitely executed. "For Django", features Mehldau's lyrical piano work in the introduction and throughout the achingly melodic track, and again at the start of "Clearing", where the open but terse melody bends slightly bluesy with the pianist's voicing.  The album's midpoint "Buenos Aires" is a sumptuous balled featuring Muthspiel on the nylon string. The short solo track is gentle, but evocative, with a feeling of longing nestled between the notes. As the piece goes on, a more rhythmic element is present. The closing track, 'Panorama' is a nice example of the bass and drum work on Where the River Goes. Muthspeil is again on nylon, and the guitar's round tone is nicely matched by Harland's percussion and Grenadier's unobtrusive support. The song ultimately unfolds like a deep breath marking the end of satisfying journey.

Agreed. This post was a real treat to read.

Thank you for sharing my words about this wonderful inspiring disc!