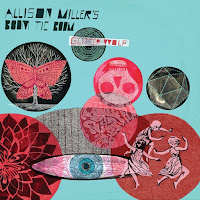 Allison Miller isn’t the kind of drummer likely to get a lot of attention from avant-garde “purists,” as her commitment to making listener-friendly, even (gasp!) commercially-viable music threatens to place her well outside the realm of artists more steadfastly dedicated to walking the uncompromising path of obscurity. But that’s unfortunate, really, as Miller has for years been building an impressive resume as a percussionist and songwriter of depth and ingenuity. Since her debut, 5AM Stroll in 2004, she’s plied her trade with one foot in the jazz tradition and the other looking for other resources, whether in rock, klezmer, or chamber-inflected idioms. And she’s been part of myriad projects beyond those under her own name, such as the impossible-to-categorize Shakers n’ Bakers, or Brooklyn Blowhards (the latter of which was reviewed here).

For anyone wondering if Miller’s cred among her fellow musicians is at all in doubt, one need simply consider the personnel who are part of her most significant project, Boom Tic Boom. With bassist Todd Sickafoose, violinist Jenny Scheinman, clarinetist Ben Goldberg, pianist Myra Melford and cornetist Kirk Knuffke, she’s got a veritable all-star ensemble of players with impeccable chops but who are similarly willing to take some chances and, yes, even have fun while doing it. The group’s previous release, Otis Was a Polar Bear (Royal Potato Family, 2016), was an under-recognized gem of modern jazz, with tightly-constructed, catchy charts that make expert use of the improvisational resources of the band, while rendering irrelevant the stylistic distinctions that separate mainstream and “cutting-edge” jazz.

Miller’s latest, Glitter Wolf, does more of the same. From the opening cut, “Congratulations and Condolences” onward, there’s an irrepressible energy fueling the music, with the tune’s engaging, klezmer-sounding theme driven steadily by Miller’s restless prodding and characteristically strong solos from Goldberg, Knuffke, and Melford, each of whom is instantly recognizable, yet with their individual identities perfectly combined. Other tracks are similarly ideal in utilizing the strengths of Miller’s partners, such as Scheinman’s extroverted presence on “Ride,” a funky workout that somehow transitions into a couple of restrained, chamber-like sections; or the beautiful intertwined solos from Goldberg and Knuffke on “Daughter and Sun” that reveal the pair’s intuitive sympathies.
But with anything Miller does, it’s really the kinetic rhythmic dexterity she provides that stands out most noticeably. Her ability to navigate Afro-Cuban, jazz, funk and rock inflections, as on “Malaga” or “Glitter Wolf,” is seamless and allows the music’s many shifts to take place seemingly organically, without them calling attention to themselves. She’s a drummer’s drummer, with a detailed, disciplined attention to craft that is remarkable. At times, this can perhaps become a detriment, particularly in the studio, as this group’s music is so finely honed that it occasionally lacks a certain spirit of spontaneity or risk. This is really a band to see live if one has the chance, as in that setting Miller and her colleagues get more of an opportunity to let their guard down and give free rein to their more adventurous tendencies. But even so, Glitter Wolf remains a highly enjoyable album of music, and it’s one that will no doubt do a great deal to maintain Boom Tic Boom’s prominence in today’s jazz world.