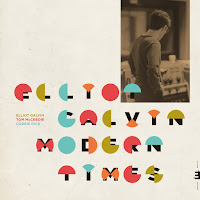 Modern Times is a live mixed and recorded direct to vinyl LP released on Edition April by Elliot Galvin, with Tom Mcredie on bass and Corrie Dick on drums. It was recorded in continuous take and is a stripped-back, honest recording by one of jazz's most established yet young musicians. A quiet protest against the over produced, changing world we live in and for that, Elliot Galvin has my admiration. His past music has been produced and, whilst offering a keen sense of the prodigious talent which this musician is showing more with each recording, there was a danger of him becoming yet another musician who could use the studio well. Here, there is a sense that Galvin is best when captured playing in the moment. Yet it is a brave musician who records straight to release. Redolent of 1940s recordings, and using a technique not used since pre-tape days, the vinyl version of this album ( there will also be CD available) has the hall marks of a classic.

Elliot explains about the recordings. "I had been making music with a lot of electronic instruments and becoming a bit disengaged with making acoustic music. Then I saw a solo piano concert by Jason Moran when I was in Montreux and I was so inspired. It reminded me why I loved making jazz and acoustic music. It was so immediate and human. I wanted to make a record like this. I remember a chat I had a while back with a friend of mine, Jorg, who mentioned he was putting together this studio where you could record direct to vinyl and it seemed like the perfect way to capture a totally acoustic record”.

Recorded in a purpose built studio in Haarlem, Netherlands on top of the largest vinyl pressing plant in Europe, the process used pre-dates even traditional recording techniques onto tape - there are no fixes, no mixing, nor mastering. What you hear is what was played. It’s deeply honest and the most accurate representation of how these three musicians sound as a group. For a musician as innovative, creative and spirited as Elliot Galvin, it is refreshing and liberating. A reminder that music making, in a digital age, does not have to succumb to modern ways of warping and manipulating sound. To approach this album though, with music of such inventiveness and modernism makes the whole experience even more powerful. As Elliot continues:


"I think it captures our musical soul. It kind of reminded me of how some native Americans used to believe having their pictures taken would steal their soul, and in a way I think we did this to our own shared musical soul by recording in this way. There are things you learn making an album like this, about yourself and each other. You are presenting ‘you’, there’s nowhere to hide, making music with people you trust deeply is very important and it’s even more important when making music like this. Me, Tom and Corrie have built up a really deep musical relationship over the years of playing together, and I think this is very present on this record....We live in the time of recorded music, and in a time when it is sometimes overproduced and treated as a disposable commodity it felt like an act of rebellion to go back to a very traditional way of making music. Not making a series of single tracks, but a whole album to sit down and listen to. Reminding ourselves that it’s magic, capturing a sound, a moment forever. Finally it’s a slight nod to the Charlie Chaplin film of the same name. That film was a reaction to a changing, industrialised, modern world, and in a way this album is a reaction to the changing computerised, digital world we live in today. Making something analogue as a quiet form of protest”.

'Ghosts' is wonderful from the count-in to the final chord. It starts with a bass rhythm set up by Tom McCredie over which the piano comes in loud then soft, whilst the drums, hitherto almost invisible because they have matched the bass beat perfectly, come across loud and clear. The sound fades in and out slightly, like a breathing thing, which adds to the sense of something waking. It is a remarkably lovely track which brings a smile to the mouth and it has a driving beat, never relinquished. It delivers something else too. Elliot Galvin has long had 'something' an inexplicable essence which you cannot put your finger on but I think here, in the honesty of a straight to vinyl recording you hear the originality, the variations in emphasis and the working through of a piece which is what makes it special and different. 'Mr Monk' opens with gentle piano chords, percussion adding sweet noise and the track builds slowly but relentlessly, the musicians adding layers of texture and rhythms. The bass of Corrie Dick carries one section whilst the piano and drums support and there is a lovely switch to a piano-led part whilst the others play supporting role. 'Cat and Mouse' is a delicious to and fro with bass leading initially but piano and drums taking their turns, structuring a swing section and even hand claps echoing the rhythm of the piano at one point. 'Shadows' is experimental and improvised around a building menace, which works really well, whilst 'Fountainhead' is an ode to piano - led jazz music of a sweet nature, with bass resonating along the lower lines, arching bowed rainbows of beautiful sound forming the reference point and then 'Change' which has many references to jazz-rooted style with an improvised touch and changes throughout the different sections which together create the piece. What is striking about this number is the percussive essence of Corrie Dick which underlies the rhythmic altercations.

'Jackfruit' is atmospheric with some very interesting twists and turns, whilst 'Gold Shovel' is aptly named as little musical treasures are unearthed, including some crashing piano over quirky percussion and bowed bass.

'Into The Dark' is sweet, atmospheric and involves a lot of chops and changes over a simple chord set. The piano melody line at times is gorgeous. The final track 'To The Moon' is set to a quirky little rhythm, into which the contrapuntal rhythm of the piano chords are inserted in the breaks before the track builds to its finale and the rhythm becomes harsher, deeper. A good choice as the closing track, it leaves you wanting to go back to the start.

Modern Times is led by Elliot Galvin and demonstrates a maturing and confidence which has not been apparent in such depth on previous recordings. There has hitherto been a sense that he had something special but it was not quite shared yet but here we get to share in the mind of a developing jazz spirit. His earlier recordings showed a developing musician seeking his place but this recording, live and honest is perhaps most profoundly revelatory. He comes back to particular rhythmic concepts frequently, and uses chordal progressions with an adventurousness which is also brave and a unique branch of his personality. More proof of his development as leader is his intrinsic knowing of when to allow another musician to lead, solo and add their voice to the recording too. Another There is a predictability - you think - then he does the unpredictable, which is exciting and interesting. His style could fit with any live event because there is enough reference to classic jazz whilst also enough improvisational additions, quirks and individuality to interest those with a freer taste. The unusual blend of classic jazz precepts with modern inceptions works wonderfully well and this is really, really good music.