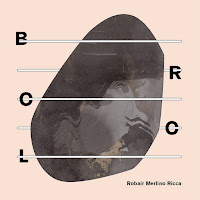 I’m mostly familiar with Gino Robair through Duets 1987 with Anthony Braxton, the solo Singular Pleasures, the assorted duos and trios of Buddy Systems, the spellbinding trio of Illuminations, and the first Splatter Trio record. Despite returning to each of these remarkable recordings with some frequency and nearly always thinking of Robair when I think of percussionists I enjoy, I realized I haven’t listened to anything he’s recorded in the past decade and a half. So I jumped on BROOL to remedy that. Robair (energized surfaces, voltage made audible) is joined by Davide Merlino (prepared vibraphone, percussion, megaphone) and Alberto Ricca (prepared CDs, sampler, no-input mixer, saxophone) for two tracks lasting a bit over an hour. Merlino and Ricca are part of a new(ish) improvising collective, the Floating Forest Collective, from the Piemonte region of Italy that contains a variety of instrumentation but seems to emphasize percussion, rhythm, beat. Merlino and Ricca have recorded together on Floating Forest and Sanna Salis Merlino Ricca Cocco Ferraro Broggini, both featuring the collective, but I believe this is the first time Robair has recorded with either of them.

It feels like a fast friendship though. The musicians don’t necessarily seem to communicate or react to each other but rather contribute pieces to the collage of a colorful, meandering, dreamy soundscape that’s percussive but not necessarily rhythmic. This percussive psychedelia is created with: bowed prepared drumheads, rims, and cymbals; distorted stutters and purrs; scratched, disintegrated, glitched-out CDs with spoken word leaking through the cracks; analog alarm clocks; electric raspberries; high-tension wires; and a stable of other sounds that would make the Star Wars sound editing team writhe with jealousy and wiggle with joy. Merlino is particularly fantastic here, preparing the vibraphone in such a way on “Energized Surfaces” to sound like a giant mbira with bottlecaps on the soundboard and playing a bright, lighthearted section in “Voltage Made Audible” that doesn’t quite sound like “Gassenhauer” but evokes similar feelings. Intriguing enough to encourage me to dig into the last fifteen years of Robair’s recordings and the rest of Floating Forest Collective’s efforts. `

BROOL is a digital-only release (Merlino and Ricca may have CD-Rs if you catch them live).