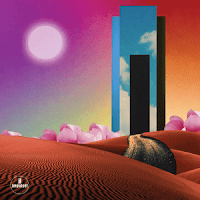 The Comet Is Coming are a UK group who have previously released on the Indie label Leaf but now make their Impulse debut with Trust In The Lifeforce Of The Deep Mystery. A band which defies genre definition, this is spiritual music, modern yet old and with more than a smattering of Mr Herman Blount. Impulse's president, Danny Bennett has said when he first heard the group he knew he was 'in the presence of greatness that was bound to shake the foundation of music. ' Label speak maybe but there is definitely something unique about this group. They fit with Verve ( Impulse's parental home) well because Verve seek to push boundaries in music - and they do. The music is co-written by the three musicians and the composition has a structured yet spiritual bent to it. King Shabaka of the band says, "We are able to catch glimpses of this life-force energy during our music-induced trances, and in doing so can contemplate our position as a human species in the context of the vastness of space and the epic scale of its workings."

'Because The End Is Really The Beginning' is synthesised atmospherics to begin before the oft- repeated 5 note riff dominates and the percussion introduces swellings of cymbal and rhythmic under currents. All is gentle and quiet with sax adding its own melody, while the percussion increases the intricacy of rhythm, particularly under the higher notes. ' Birth Of Creation' works around a repeated theme, with synthesizer picking up the bass melody which is worked around across the track, and returned to frequently. Deeply resonant synthesiser notes emphasise the middle section, whilst the saxophone creates scaled lines in the background and the drums maintain a relentless rhythm, until the final section when sounds merge, the sax squeals its protest and a chaotic momentum with an off kilter beat from the percussion and sax is maintained to finish the track. ' Summon The Fire' is interesting with echoed sax over double time percussion. The theme is strong, repeated again and again and the sense of speed in this track is engaging as it builds and drives forward. This is intense, high-energy, gender defying music.

'Blood Of The Past' is a pulsating, spiritual, energy encapsulating delivery with Shabakah leading on sax over a swelling and receding rhythm, the sax speaking loose-reeded and persuasive musical volumes but then is usurped by guest vocalist Kate Williams as she delivers a state-of-the-universe-address that summons up the spirits of the past and the potential mistakes of the now and future, the essence of innocence in her delivery contrasting with the mature, well honed music behind. The sax is at times unhinged in the best way and verges on the anarchic over a steady and entrancing beat pounded out by the drums. Glorious.

'Super Zodiac Comet is Coming' begins with synthesiser, soothing and blissed out before any sense of peace is destroyed gleefully by the rapidity of the rhythmic emphasis changing and the temp is upped. Suddenly we are on a hell-for-leather driving, helter skelter, chasing the vivid textures of the sax which, though repeating the riff many times, each delivery is emphasised slightly anew. Best track yet.

'Astral Flying Comet is Coming' starts with the final note of the last track and eases into a different and spirit-led exposition of musical dialogue, with the synthesizer at its heart, ' The last minute has deep throated sax over light, free flowing synthed notes and offers a cool contrast to the first two thirds. 'Timewave Zero Comet is Coming' is a bit of a genre mash-up with wonderful percussion supporting syrupy sax which works in and out, until the gloriously beautiful central section of just sax and percussion, which is a delight. ' Unity Comet is Coming' is weirdly disconcerting with its interplay of rhythms provided by sax and percussion over flitting, jittery synthesisers and a Caribbean feel to the rhythm - you can even hear cymbalic waves in the background if you listen and harmonics introduce almost a vocal choral line at one point. '

'The Universe Wakes Up Comet Is Coming' is a full blown narrative in itself with a slow yawning opening, a slow burning middle section with sax melodies singing over steady synthed chords before the sax goes spacial and off unto a world of its own making - beautiful riffs, short melodic plays on the key notes and finally a repeated, repeated (repeated) sequence of notes delivered at mad-cap velocity.

I was not sure what to make of this album even on the second, third listen and it is difficult to say whether all the hype is justified. It is good - it is just not sure of what it wants to say. The PR notes tell you that on track 4 Kate Tempest delivers an address that evokes the 'gone-but-not-forgotten spirits of William Blake, Ian Dury, Carl Sagan and Stephen Hawking, space travelers all' - it doesn't for everyone. There is also the message their music is redolent of John Coltrane, Sanders and Alice Coltrane - not really, apart from the fact they are on the same record label now and there are some familiar essences but really, this is pure The Comet Is Coming. The vague and disjointed titles do nothing to explain the music and in many cases is hard to relate to at all. However, what this is, is original and they should go with that. There is here a divine combination of spirit-led imaginings with superb musicianship and for this alone, the album is worth everything. It is great to hear them not adhering to any genre entirely but introducing elements of African, Latin and classic jazz beats. The music is predictable to the extent that there is scaffolding of oft-repeated riffs and melodies but it is how they alter the delivery and build around the framework which is impressive.

Descriptions of the band in the PR material includes lines like , "'The Comet Is Coming' are here to apply a salve to the wounds of the world and offer succour to the spiritually deprived. To do so they have delved into their collective sub-consciousness during months of studio experimentation to bring back these souvenirs of astral and auditory travel. " There is much talk of the intergalactic connection, astral planes and their mission statement is " The Comet is Coming to destroy illusions. It will manifest new realities, perceptions, levels of awareness and abilities to coexist. It is a musical expression forged in the deep mystery. It is the overcoming of fear, the embracing of chaos, the peripheral sight that we might summon the fire. Through the transcendent experience of music we reconnect with the energy of the Lifeforce in hope of manifesting higher realities in new constructs. Because the end is only really the beginning." Really? Far better is when Shabakah describes the album simply as, 'an acknowledgement in the midst of all the darkness we see of those who trust in the imagination". Aaah...

The originality is great and the music is superb, the sax driving and completely engaging whilst the percussion and synthesiser control and create guidelines ( actual musical ones). This is interesting - and at times, quite beautiful.