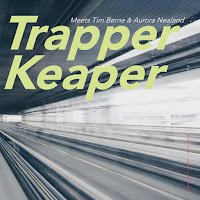 I caught half of this quartet live a few months ago. Tim Berne, a musician I had strangely never seen during my years in greater New York, headlined, accompanied by some local musicians. One of these was Aurora Nealand. Although Berne was amazing, I was already expecting big things from him. Nealand was the real discovery of the night. She played accordion, electronics, vocals, plastic cup, sax, chain, and, quite likely, a few other objects I am forgetting. She was responsive (as was Berne and the bassist that night, James Singleton). And, she converted simple colloquial sounds – the crushing of a plastic cup, the rattling of a can, the scrape of a chain, the howl of a voice – into a rich tapestry of sound that simultaneously felt playful and serious.

With that night in mind, I was pleased to come across Trapper Keaper Meets Time Berne and Aurora Nealand. Trapper Keaper is a New Orleans “space-funk duo” featuring Marcello Benetti on drums and Will Thompson on keys. On this recording, Berne contributes his sax and Nealand, her aforementioned bag of tricks.

The first track, the aptly titled “Boom,” begins with Nealand’s wailing vocals, soon accompanied by a driving dance beat and Berne’s soulful lamentations. This track is brief but evokes a surprisingly refreshing combination of Water Babies-era Miles and contemporary electronica. Already, the listener can deduce they are in for a wild ride through a series of layered and fragmented, but almost danceable and pervasively energetic sound-worlds. Tracks such as “Unidentified Flying Objection” is slower and softer than the first two pieces – though energy and tension burgeon beneath the surface - and features sax hummings and mutterings, vocalized melodies, and Trapper Keaper’s fragmented grooves. Subsequent tracks fluctuate between a manic energy and the rich textures. At times, the latter pieces approach ECM-styled production (albeit with a little more vigor) as Berne lays down smoky, downtown phrasings, Trapper Keaper drive the rhythm with their contorted rhythms and pitter-patter drums, and Nealand contributes everything from yowls to amplified chain-rattles to manipulated bubble-sounds. “Flame Among the Ashes” is a richly textured exploration of stilted psychedelia, that evokes Branford Marsalis’ work with the Grateful Dead. And, just when it feels like the music is getting too loungey, the music shifts to more abstract and entropic territory. The final piece, “Amarcord (Fellini Memories),” begins with a solitary whistle, then a soft, hummed lullaby. Sax squeals, bird chirps, spacey electronics soon fade in, followed by a bluesy saxophone and a sparse, muted drum. This is one of the least intense tracks on the album. It is also the most curious, directed, and haunting.

This is not normally the type of album I would seek out. That said, I am glad I gave this one a chance. Although a few tracks seem to end before they begin, these pieces are overall compelling and, when taken together, cohesive. Cheers to Trapper Keaper, Berne, and Nealand for pulling this off so well.

The album releases in CD and digital formats on April 12th