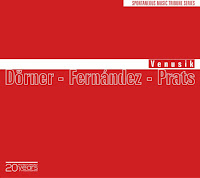 There is an amazing number of free jazz and free improvisation albums that associate with the physics of the universe, astronomy and space exploration (from Coltrane and Sun Ra ... to more recently Matthew Shipp, William Parker, Jemeel Moondoc). The link is obvious for a number of reasons: first because of the music's universality in the literal sense, of transcending borders, of going where no man has gone before, of exploration and adventure, second because of the inherent spiritual sentiment of belonging, of a kind of collective membership of something much bigger and vaster that connects us all and offers a depth and breadth that dwarfs our daily petty concerns, liberating us from the 'here and now' into something of true importance. This music aspires to be grand, majestic, timeless and of the absolute essence. This does not mean that it's per definition arrogant or pretentious. Space travel is also a very humbling experience.

On this album in the Sponteneous Music Tribune Series of the Polish Multikulti label, this trio is on its way to Venus, using the name of the Soviet Venera space programme that started in the 60s to explore the 'morning star'. In analogy with the Sputnik, the probe was called Venusik by Western media. The trio are Axel Dörner on trumpet and electronics, Agusti Fernández on piano and Ramon Prats on drums and percussion. The naming of the instruments is pretty useless because you will hardly recognise the sound of these individual instruments in the music itself.  The titles of the five tracks all refer to the acronyms of various national space agencies:

The music itself is as undefined as matter and anti-matter in outer space. "AEM" offers light scraping, grinding, squealing, rasping, screeching sounds that start to coalesce into multiple layers and increased density and even stronger intensity, which seamlessly evolves into "SSO" which shifts to more discernible sounds, with thundering arhythmic drumming, voiced trumpet and madly resonating piano strings. Dörner's sound is agonising over the magnificent mayhem of piano and percussion.

"SRON" brings us back to more hesitating explorations, with whispered industrial sounds and rumbling drums, as if an exercise of how sound vibrates in alien circumstances without oxygen, even to the extent that the second part of the piece is barely audible as if moving beyond the human level of auditive perception.

"SUPARCO" moves from a quiet universe into something that is devastating and overwhelming. Again, our language is too poor to capture the sonic complexity and novelty, but it's somehow shocking to listen to. As a listener you don't want to experience this - because you're way out of your comfort zone - but then you also relish it.

"SNSB" starts quieter, more granular and deeply resonating. Fernández creates a shimmering foundation over which Dörner's lengthy tones hover, with heavy drum beats emphasising the drama, then the strings become ominous and foreboding, with heavy rhythmic thumping inside the piano adding gravity and a sense of inevitability, as if you're on a spacetrain that's now totally out of control. The oscillating linear single trumpet sounds add an eery atmosphere of doom to the proceedings. Then things quiet down. The momentum decreases, the volume becomes lighter, the density decreases ... yet the tension remains.

The album's power is its unique sound, the cohesiveness of the musical vision the three musicians create and the coherence of it throughout the entire performance. And it's a great exploratory sonic journey through space. It's great that musicians, even the most avant-garde, still take things a step further to 'go where no man has gone before'.