Readers of the blog may know the work of the Slovenian drummer Zlatko Kaučič, especially his recorded collaborations with European heavyweight improvisers such as Peter Brötzmann, Evan Parker, Agustí Fernández. Ab Baars, Phil Minton, Barry Guy, and Maya Homburger. Kaučič single handedly fostered a scene for free music in the newly founded Slovenia, mentored younger musicians, ran venues, organized local festivals, and always encouraged all around him to keep pushing their boundaries. Now, a bit about his music... 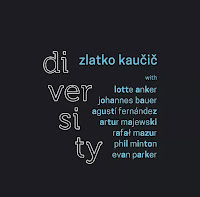 The Polish label Not Two has released, since its inception, special box sets that have celebrated special projects from Ken Vandermark (including DKV Trio & Joe McPhee), Mats Gustafsson, and Barry Guy, as well as important anniversaries such as celebrating 40 years of Joëlle Léandre's professional career as a musician, and more recently that of Kaučič, who celebrated last year his 65th birthday. The 5-disc box Diversity encompasses a series of intimate, free-improvised meetings with old and new comrades, all highlight his idiosyncratic percussive language, focused on his own set of ground drums, percussion devices and his distinct playing of the electric zither.


Diversity begins with a live recording - a trio with Catalan pianist Agustí Fernández and British tenor sax master Evan Parker, captured at Sound Disobedience Festival, Ljubljana, Slovenia, on October 2016, and titled Butterfly Wings. Kaučič recorded before duets with Parker (Round About One O’Clock, Not Two, 2011) and Fernández (Sonic Party, Not Two, 2014), while Parker and Fernández have collaborated regularly since the mid-nineties as a duo, as well as in Parker’s Electro-Acoustic Ensemble and Octet, and in a quartet with Barry Guy and Paul Lytton; however, this is the first recording of this trio. Kaučič colors the abstract, free-formed interplay with imaginative kinetic energy. He resonates Fernández inside-the-piano playing with subtle zither sounds on '#2', offers minimalist, poetic interventions to the tranquil and mysterious duet of Parker and Fernández on '#3', sings peacefully with his percussive devices on '#4', and sketches inventive, quiet percussive sounds on the last, dark and enigmatic '#7'.


The second disc, Kras, is a duet with Parker, recorded live at Jazz & Wine of Peace Festival in San Michele del Carso, Italy, in October 2016, two days before the trio with Fernández. Parker plays the tenor sax while Kaučič adds the drum set to his percussion devices and the electric zither. Both Parker and Kaučič have mastered the sax-drums format and here opted for reserved yet highly conversational, free jazz dynamics that explores twisted, melodic themes and minimalist textures. The 20-minutes “#2” distils best their profound connection. Kaučič begins with ripples of meditative zither sounds, Parker answers with beautiful, lyrical ideas and Kaučič continues coloring this conversation with powerful, rhythmic drive. The following #3” deepens the delicate, fragile vein of the zither and the sax and the short encore “#5” is the most expressive piece here.
.

Kaučič calls playing solo “a necessary evil” as he is forced to “lay yourself bare and expose your true self”, and the third disc, Rainbow Solitude, is exactly that. Kaučič was recorded at studio Input Level, San Biagio di Callalta, Italy on April 2016, playing ground drums, various percussion instruments and devices and the electric zither. The short nine pieces stress his unique melodic approach, often contrasted with the distorted and otherworldly sounds of the zither, and encompass broad range of sonic references that are apparent in his meetings with other musicians. You can find traces of gamelan on “Drive Through Obstacles”, delicate touches of cymbals on the meditative “Tonal Flow”, peaceful layers of resonant sounds on “Memories”, noise machines on “Sip Of Story”, disturbing cinematic tension on “Pokrovček”, meditative and ceremonial sounds on “My Home”, cheap sci-fi sounds on “Himna Za Mojo Teto Karlo”, a dramatic story on “Predor” and a playful, folky song on “Mlin”.

The fourth disc, Anima, recorded at Saint Martin's Church, Šmartno, Slovenia, on September 2016, with Danish tenor, alto and soprano sax player Lotte Anker and Polish trumpeter Artur Majewski and acoustic bass guitar player Rafał Mazur, both recorded later with Fernández (Spontaneous Soundscapes, Not Two, 2017), and all appeared on Anker’s recording from the same location (Plodi, Klopotec, 2017). Kaučič plays the ground drums, percussion and the electric zither. The atmosphere of this meeting is, again, minimalist and peaceful, focused on patient structuring of nuanced, fluid textures. Anker plays in an impressive subtle and poetic manner here, especially on “Iconic Thoughts”, “Unison Creation” and “Trte”, where she cleverly contrasts the urgent attacks of Majewski, while Kaučič comments and steers this quiet yet expressive commotion with delicate touches of the cymbals, skins and the zither.

The last disc collects two duos. The first is 'Med-Ana' with late German trombonist Johannes Bauer, recorded at the Old Movie Theatre, Medana, Slovenia, on September 2012; the second, Šmartno Suite, in memory of Bauer, with British vocal artist Phil Minton, recorded at Brda Contemporary Music Festival, Italy, in September 2014. 'Med-Ana' is a beautiful homage to one of the greatest free-improvisers of the European scene, emphasizing his passionate, highly playful and talkative interplay with Kaučič. Both sound like close friends who enjoy sharing amusing secrets and wild stories. Kaučič adds some subtle dadaist percussive inventions and interventions to Minton's vocal gymnastics but eventually manages to discipline the stream of Minton’s whispers, moans, whistles and overtones. 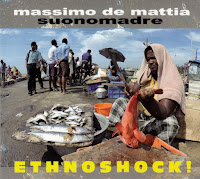 Kaučič plays here in on a live recording from the Italian quartet of flutist Massimo De Mattia, featuring vibes-balafon-electronics player Luigi Vitale and keyboardist Giorgio Pacorig, captured at Piazza Metteotti, Udine, Italy in July 2017. The cover photos and the liner notes are from Italian reeds player Marco Colonna (with whom Kaučič recorded a trio with Agustí Fernández, Agrakal, Not Two, 2018) relate to the movement of immigrants from the Middle East and Africa to Europe and calls for listening, respect, acceptance, maturity and welcoming. This quartet suggests that music paves the way for such compassionate values.


The quartet equates the unpredictable mass movement of people to the unpredictable elements in any free-improvised meeting and demonstrates that society and music face the same issues. But, at least, with this inventive quartet, the future sounds more promising. 'SuonoMadre' insists that there is a place to all sounds, old, new and futuristic, acoustic and electronic, jazz-tinged and more traditional sounds. Chaos forces all out of their comfort zone and offers dynamics and solutions, You still need open ears and minds but then the music flows, almost as by its own will. Then, the different, individual languages of the four musicians melt organically into a new sensual, seductive language. A language that spreads playful, melodic chants that can drive away the old demons of hate and fear. Free-improvisation is indeed a political practice and a very humane and compassionate one. 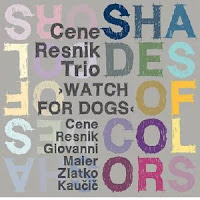 This great album somehow slipped beneath the radar. It brings together fellow-Slovenian tenor sax player Cene Resnik, a frequent collaborator of Kaučič, with another of his close collaborators, Italian double bass player Giovanni Meier. The trio was recorded in “beautiful old church” - St. Mary of the Annunciation - in Crngrob, Slovenia, in September 2016.


Resnik a soft and gentle voice, often a lyrical one, rooted in jazz legacy but totally free. Maier and Kaučič are perfect partners for this kind of chamber, intimate - a collection of “Conversations That Never Stop” as the last piece is titled. Both color the searching yet harmonious phrases of Resnik and his careful and patient investigation of overtones and multiphonics with minimalist but precise touches, offering great timbral sensitivity. Kaučič work with the cymbals and inventive percussive sounds throughout the extended pieces “Zemlja (Suite of Crngrob)”, “Thieves Came Quietly”, “Satellites” and the last piece is truly remarkable, always enriching the deep melodic veins of Resnik with great senses of imagination and invention.