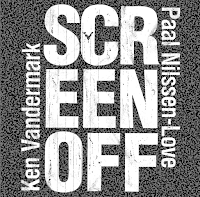 On a factual level, Screen Off is Ken Vandermark’s and Paal Nilssen-Love’s tenth album. However, this being a well-documented project, they decided to do it in an exceptional way. With Nilssen-Love’s house producer Lasse Marhaug, they've rummaged through countless Vandermark/PNL Youtube clips from over the past ten years. Obviously, these recordings are unprofessional, and it’s like listening to random bits of their music, but Nilssen-Love’s and Vandermark’s idea “was to embrace the limitations of the format”. In order to accomplish this, they used 21 audio snippets (and left out the videos, which is why they called the album Screen Off). Marhaug didn’t use the selected excerpts chronologically, but rather in a way that allows the music to make a certain sense. However, this implied jumping back and forth between the cuts. He also used a strict time limit for his selection and since the duo usually plays long sets, the result often sounds disruptive because the music is sometimes cut off in the middle of a certain musical process.

Such an unconventional way of putting an album together has several interesting effects. Bootleg recordings, of course, are a double-edged sword. On the one hand they are promoting music, and on the other hand, they are published without the artists’ permissions, and typically the musicians are not satisfied with the quality of this music. Nilssen-Love and Vandermark however have reversed this process and use what has been released without authorization and thus regain a certain interpretive sovereignty over their material. Secondly, Screen Off works like a collage, presenting a series of seemingly unrelated sequences that suddenly shift. Doing this Nilssen-Love, Vandermark and Marhaug are able to highlight what the duo is about: bringing together different musical styles like funk, expressive free jazz, impressionist sound excursion, Latin grooves, balladesque moments etc. Juxtaposing them the way they do it here, these core elements are dragged into the spotlight and accentuated. Marhaug links these pieces like a radio DJ, using hard cuts, sound snippets, scratches and fade outs. This gives the album a certain rough punk rock/DIY approach. The poor sound quality is no disadvantage, rather it underlines the message.

In the end, the approach taken has an alienating effect (like in a Bertolt Brecht play, for example). On the one hand, it will disturb many listeners, on the other hand it’s something refreshingly new. For new listeners, I would recommend beginning with The Lions Have Eaten One Of The Guards. However for fans, it’s definitely a must.

Screen Off is available as a digital album and as a CD.

You can listen to it and buy it here: https://pnlrecords.bandcamp.com/album/screen-off
Paul on Thursday, May 02, 2019
Share

Well put, Martin. An interesting take on recycling - original then second-hand into something at an even further remove.

Thanks. Second or third hand would be excellent. :-)