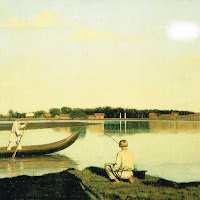 I’ve probably listened to this record more than any other thus far in 2019, as I’ve been extraordinarily busy tending to the non-music related activities in my life and this type of music lends itself well to both active and passive listening. It sounds fantastic whether you are attending to it or not, and will wriggle its way into your subconscious if given half a chance. “erroribus humanis et antinomy” (translated from Latin: human errors and antinomy) documents two meetings between Tetuzi Akiyama on guitar, Ken Ikeda on electronics, and Chihei Hatakeyama on guitar and electronics. The uber-prolific Akiyama is one of my all-time favorite guitar players. His work has appeared here sporadically in the past, as his musical practices tend to overlap with the interests of the blog. He’s a special artist and one of the most unique voices in modern improvisation today, whether playing solo or with acclaimed artists such as Taku Sugimoto, Toshimaru Nakamura, Oren Ambarchi, and Alan Licht. Ambience master and video artist Ken Ikeda has been very active in the free improvisation arena as of late, releasing terrific albums with Eddie Prévost , Toshimaru Nakamura, and David Toop. I’ve also been a fan of producer and guitarist Chihei Hatakeyama since his days on Kranky Records. There’s a meditative beauty to his music that radiates into the listener’s headspace like a narcotic, and when I saw him teamed up with Akiyama and Ikeda for this record I knew it would be a pretty special set.

The first track “I” begins with a quiescent hum of electronics over which Akiyama’s guitar is very subtly strangled. I’ve always enjoyed the unconventional sounds that Akiyama can wring from his instrument, and in my opinion his sense for melodic abstraction is unsurpassed. Examining the underlying hum a little more closely reveals a sort of skittering, fractured dynamic layered with high pitch swells that echo and decay back into the simmering EAI sauce. There are some low tones that simply hang tranquilly, like taut but motionless flags buried far back in the mix. Ikeda, true to his Touch Records roots provides a bed of ambience for the guitarists, peppered with delay modulation noises and light electronic pings. Hatakeyama (I assume) is the source of the swelling, delayed tones, though I’m half guessing here. His playing is like celestial birdsong, a benevolent specter residing in the right-most channel (again, I’m guessing here, but I believe the mix is: Akiyama – L, Ikeda – M, Hatakeyama – R). “II” begins with Akiyama’s scratched out notions as Ikeda and Hatakeyama swell from the ether. A subtle untreated guitar arpeggio grounds the piece as all manner of electronic effects are peppered into the amalgam. It’s truly difficult to tell who is doing what here so I won’t bother any further. The resulting sound field is gorgeous, at once serene yet highly active, like a still pond teeming with colorful, busy fish just beneath the surface. “III” is slightly noisier than the preceding songs, lots of grainy artifacts and unconventional guitar sounds agitated in a vibrant, kaleidoscopic dust cloud of haze and shimmer. Ikeda at times sounds like rain on a paper roof, at others like a malfunctioning public-address system. Akiyama’s guitar work is unmistakable, and it works brilliantly with Hataeyama’s hiccupping, whooping delay undulations and granular fragments. The last piece “IV” is the shortest and perhaps the most straight-forward of the set. The mostly untreated guitar around the periphery surrounds Ikeda’s electronic glow as it radiates from the center of the mix and yields a symmetric soundscape that nicely rounds out the album.

Although this is way outside of the jazz idiom, I find this type of free improvisation just as enjoyable. It’s measured for sure, but there is plenty for the listener to take in. It’s all about subtle dynamics, soft details, and the building of sonic textures and it succeeds marvelously at that. I’ve found that this sounds best on headphones or played at high volume on decent speakers in an otherwise quiet space in order to really get the full experience. And even though I’ve listened through the album a couple dozen times I have yet to tire of it. Highly recommended.