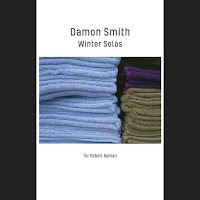 Despite performing solo frequently, Winter Solos for Robert Ryman is contrabassist Damon Smith’s first solo recording. Its four tracks document a half hour live performance that occurred four days after the death of Robert Ryman, the minimalist, monochrome painter to which the recording is dedicated and whose works provide the names of each track here. By some serendipity, the performance took place during a heavy snow, the natural world reflecting Ryman’s fields of white.

Abstraction in the visual arts has roots in improvisation in the sonic arts, with Kandinsky’s polyrhythmic lines, free color, and improvisations inspired by his synaesthetic experience of jazz. This line of influence traces through Ryman, who originally moved to New York City intending to become a jazz saxophonist, even taking lessons from Lennie Tristano. And it’s mirrored in Smith, who explicitly draws significant influence from the visual arts. In preparing for his first solo recording, Smith wanted “something definitive, an overview of [his] work as it stands,” so it’s fitting that a visual artist would be a focal inspiration for it. And, like Ryman pushed boundaries with the limited timbres of white, Smith intended to do so with the limited colors of contrabass.

“Surface Veil” begins with aggressive arco, the strings overpressured, the playing impassioned, and the sound sometimes like black metal growls before transitioning to a rapid, pointillistic bowing that produces whirling lines of rapidly fluctuating volume and time and a fractured melody in its overtones. “Reference” then exercises plucking techniques with enthusiasm, strings slapping against the neck as palms and fingers slap against strings, bent notes left to hang after physical flurries; the other half is a collage of timbral impressions, quickly moving through a series of approaches and techniques. The springy, diminishing pulse of prepared bass, drumming the body, and attacking the body with chains and objects characterizes “Cord” until Smith bows something like tape playing in reverse. And “Attendant” somewhat returns to the overtone-rich, dynamically-deranged arco of the first track.

Though it can begin to feel systematic in cataloging his style or to blend together like a colorfield, Smith has perfect pacing, injecting emotivity to offset sterility and varying technique to offset monotony. From what I’ve heard of Smith, it’s an authentic expression of his self, a successful definitive overview. It’s an apt dedication, worthy of its dedicatee. It’s a solo bass record to be enjoyed and contemplated.

Winter Solos for Robert Ryman is available digitally and on cassette.