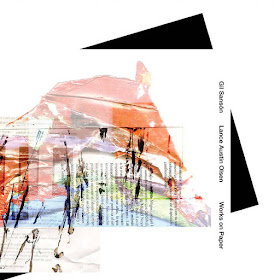 Neither of Sansón and Olsen are ordinary musicians. Sansón is a self-taught composer who defines himself a “lifelong music student”. His musical origins are in rock, avant rock, classical music, contemporary music, and electro-acoustic improvisation, and his music is not governed by dialectics and shies away from rhetoric or representation, narrative concerns or virtuoso playing. Olsen is known for his abstract large-scale works, where the surface is endlessly reworked, with each subsequent piece forming a record or narrative of ongoing discovery. Through this process the viewer experiences an inextricable link between the activity of producing the work as well as the sense that they are seeing but one element in a lifelong pursuit. He began working with sound in 1997 and released limited-edition album on his label Infrequency.

Sansón and Olsen began to work together, long distance, in 2014 when Olsen painted the cover of Sansón's Immanence, A Life (Makam, 2015). Soon both decided to enhance their profound, mutual understanding to collaborative musical projects through realizations of each other's graphic scores or paintings. Their first collaborative piece, Sansón’s graphic score for “A Meditation on the History of Painting”, was released on Olsen's Dark Heart (Another Timbre, 2018). Works on Paper offers four new collaborative works: On the first disc, recorded in Caracas, Sansón interprets two variations of Olsen's painting-graphic score "Pra Mim (2016)"; On the second disc, recorded in Victoria, British Columbia, Olsen offers two variations of his interpretation of Sansón's graphic score “Meditations (2017)”.

Sansón plays on Olsen’s “Pra Mim #2 - Works on Paper” and “Pra Mim #1 - Fail Better” variations the acoustic guitar, melodica, violoncello, electronics, objects and field recordings, samples the voice of America sound artist A. F. Jones, as well as excerpts from two compositions of his own, performed by pianist Dante Boon, and excerpts from experimental Dutch composer Antoine Beuger's “Monodies pour Mallarmé”, performed by soprano Anna Rosa Rodriguez. Sansón manages to arrange all these contrasting medium and transform-paint all into a multilayered, kinetic and colorful texture. This rich, expansive texture still sounds intimate, delicate and quite mysterious.

Despite the geographical distance, the distinct methods of composing-painting, and different backgrounds in musical aesthetics, Olsen’s variations explore like-minded inner worlds. Olsen plays on Sansón’s “Meditations #3” and “Meditations #2” (part of the graphic score is captured on the cover) lone, un-tuned guitar, amplified objects, shruti box, samples, including found wax cylinder recording, and excerpts from his work “Craig’s Stroke” performed by vocalist John Luna and organist Debora Alanna. The atmosphere on these sonic meditations-sound paintings is more intense and tensed but also more austere and compassionate, as if envisions a dark, threatening future.

Every listening to this unique work of art may bring completely different answers, all insightful and all valid, to the kōan of Sansón’and Olsen.