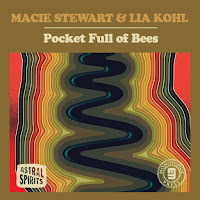 Macie Stewart (violin, voice) and Lia Kohl (cello, voice) play freely for four tracks lasting 23 minutes on Pocket Full of Bees. Both Stewart and Kohl perform within both pop/rock and more experimental spheres but blog readers are probably most familiar with Kohl through ZRL (alongside Ryan Packard and Zachary Good) and with Stewart through her work in Marker. Both appear on Tim Daisy’s October Music (Volume 3) 7 Compositions for Duet, though separately. Their first released recording together is Steve Gunn’s The Unseen In Between from this year, and I suspect these sessions are in some way connected to those since the recording engineer for that mixed and mastered this.

I think of Pocket Full of Bees as practices in approaching harmony and resonance with the self, the instrument, and one another. The similar timbres of the violin and cello further compliment each other by employing similar technique simultaneously. Both saw, radiating overtones, and Kohl’s droning propeller plane is met with Stewart’s whistling tea kettle on “Big Space Little Nothing;” Kohl and Stewart tap the strings with the bow, bow below the bridge, and strike the strings on “Toothpick Bicycle;” and the cello and violin fall into a rhythmic pluck together on “There’s Something In My Sock (It’s Good).” Like their soundings, their voicings are often similar to each other timbrally and technically, with both emitting oohs, eees, aaahs, shhhs, shrill shrieks, and purrs together. And their voicings are often similar to their soundings, with call-and-response vocalization matched with contrapuntal instrumentation or sustained bowings matched with held singing. And finally the structures seem to culminate in harmony: “Big Space Little Nothing” ends with Kohl and Stewart phasing into vocal harmony; “Toothpick Bicycle” begins with the cello and violin varying their cadences to phase in and out of harmony; and “Honey Not Sweet” sees their voicings obtain a pulsing resonance together.

Though harmonious, the music is not necessarily melodious. Heavy use of extended techniques on the strings contributes to an environment that’s often tense, always timbrally rich, and alternately playful and plaintive. It’s not trance-inducing but it is meditative. And there’s a kind of soulfulness or spiritual nakedness approached here. It can sometimes recall the journey of Andrew Smiley’s Dispersal (also on Astral Spirits), but taken with a partner. A recording to treasure, for sure.

Pocket Full of Bees is a digital-only release.