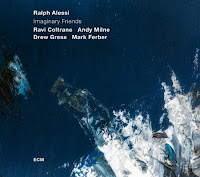 It’s always somewhat puzzling when a musician with trumpeter Ralph Alessi’s chops can’t quite seem to earn the same accolades as a leader that he typically receives as a sideman. Despite having played superbly in an associate role with an astonishingly wide array of counterparts—everyone from Fred Hersch and Don Byron to Sam Rivers, Steve Coleman, Tom Rainey and Tomas Fujiwara—Alessi’s own albums haven’t always lived up to their promise. Alessi has flawless technique and he possesses an imaginative compositional approach, grounded in a deep musicality that is both challenging and eminently listenable. Yet his latest record, Imaginary Friends, despite having Alessi’s trademark high-caliber musicianship and his top-shelf working band, This Against That, in support, seems somehow less than the sum of its parts. Although it’s a very good record, one can’t help but wonder why it’s not a great one.

Alessi has been playing with these colleagues in this configuration for over a decade, and they’ve issued two previous releases: Look (Between the Lines, 2006) and Wiry Strong (Clean Feed, 2011). In many respects it’s an ideal lineup, as bassist Drew Gress and drummer Mark Ferber have the ability to pivot between groove and open-ended liquidity that is ideal for Alessi’s expansive tunes, while pianist Andy Milne and saxophonist Ravi Coltrane bring sophisticated harmonic intuitions and a lyrical sensibility that vividly illustrate Alessi’s soundscapes. And they spent a European tour honing the material on this album before finally going into the studio to document it in mid-2018.

One thing worth emphasizing is that when this album works, it works really well. The album’s opener, “Iram Issela,” has a gradually-building intensity, with a poignant melody that expands outward until Coltrane eventually takes it over with an emotionally wrenching solo. Other pieces give a taste of what the band can do when it feels its rhythmic potency: “Fun Room” thrives off of a punchy groove reminiscent of Milne and Alessi’s tenure with Steve Coleman, while “Melee” has a deliciously crafty off-meter melody that gives the whole band a chance to stretch out for over ten minutes of glorious post-bop, with Alessi in particularly fine form launching into an invigorating solo over some especially feisty work from the rhythm section.

But the fire that ignites these pieces is unfortunately in danger of being doused by the album’s more subdued moments. One is tempted to chalk this up to the distinctively restrained ECM aesthetic; Alessi himself notes that working with producer Manfred Eicher encourages him to “respect the space in the music,” leaving more room for indeterminacy and openness to emerge. There’s an element of mystery that thus shines through moody tracks like “Pittance” or “Around the Corner,” and they are not without their own appeal. But they exist in uneasy tension with the headier stuff on the record; and the bottom line is that this band is as its best when it’s really going for it. Too often the musicians seem to lose their purpose on the more melancholy, meandering pieces, something that subtracts a good bit of the energy from the music. Even an up-tempo piece like “Fun Room” is noticeably tamer and less assertive when brought into the ECM studios; comparing the exhilarating version recorded live at Moers below with the decidedly more temperate one on the album makes this abundantly clear.

Imaginary Friends ’ shortcomings aside, it’s evident that this is a band with enormous potential, and Alessi will assuredly make his masterpiece with these guys at some future point, even if he hasn’t quite gotten there yet.