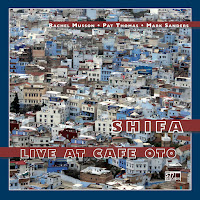 
The discography of British, London-based sax player Rachel Musson is criminally slim but perhaps her new album, Shifa: Live at Cafe OTO, released by New York-based 577 Records and another forthcoming album on the same label with William Parker, Daniel Carter and Federico Ughi, may expose her work to new, greater audiences. Shifa - شفاء - is inspired by the Arabic word for healing and captures beautifully the uplifting, spiritual energy of this free-improvised music, recorded at London’s Cafe OTO during June 2018.

Musson, who plays on the tenor and soprano saxes, is accompanied by two of the most experienced heroes of the British free-improv scene - drummer Mark Sanders - who has played with Musson in previous trios, with keyboards player Liam Noble on Tatterdemalion (Babel, 2013) and with double bass player john Edwards on Bibimbap (Two Rivers Records, 2016) - and pianist and electronics player Pat Thomas, who have collaborated before with Sanders, including on recordings with sax player Paul Dunmall, trumpeter Wadada Leo Smith.

The healing method of this trio, naturally, is based on a deep knowledge of the art of the moment and the legacy of free jazz and modern music. The first, extended improvisation, cut into two parts for the vinyl version of the album but presented in the digital version also in unedited version, offers a series of raw, powerful and intense collisions between Musson and Thomas. Every phrase, gesture, idea of Musson or even sounds produced by her extended breathing techniques is abstracted instantly by Thomas, whose uncompromising percussive attacks and electronics sounds eventually enforce a pulse-free texture, and vice versa by the opinionated Musson who plays here on the tenor sax. Sanders acts on this improvisation as a guardian of this turbulent equilibrium who employs subtle, wise interventions to keep the tight interplay on course. Throughout this piece the trio sounds like a much larger unit, filling the space of Cafe OTO with so much vibrant energy that can activate the whole electric grid of the surrounding neighborhood. The second part of the first improvisation suggests a more conversational - literally, as Musson often speaks and howls into her mouthpiece - vibe, reserved, but still highly rhythmic, and sometimes openly emotional and surprisingly bluesy.

But, this trio is determined to exhaust all its energy reserves and the second, shortest, improvisation is developed in classic free jazz parameters. It is a fiery, restless piece that moves fast between fleeting rhythmic patterns and ecstatic and touching themes, as all take the lead but Musson eventually calls the shots. She plays here on the soprano sax and excels as a charismatic leader her has a sonic universe of her own.