I had the opportunity to witness cellist Judith Hamann play with Martin Taxt, Chris Cogburn, and Kjell Bjørgeengen earlier this year and left the set spellbound. She’s worked with Taku Sugimoto, Graham Lambkin, Alvin Lucier, and many other luminaries. From what I’ve heard so far, her sound is in a similar vein to the echtzeitmusik some of her expat Australian compatriots make. Earlier this year, the blog covered her ongoing collaboration with saxophonist Rosalind Hall, Gossamers. Here are two more well worth a listen. 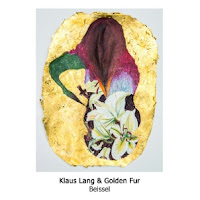 Hamann, Samuel Dunscombe (clarinet), and James Rushford (viola, harmonium) comprise the ensemble Golden Fur, which formed in 2008 with the intent to perform new or underperformed compositions. They are joined by Klaus Lang (organ) for a single track lasting 41 minutes on Beissel, which was recorded live in an Austrian abbey in 2016.

Broadly, the music is a dynamic drone with interludes of somber chamber music and jubilant, ecstatic swells and melodies from the organ. The cello, clarinet, and viola can seem like aspects of the organ, rising with it before fragmenting in free color like stained glass. Organ and harmonium hum, cello overtones, and clarinet resonance alternately contribute pulses and divide the beat of the undulating, overarching drone. At one point there’s bells or something like it. It’s meditative, transcendental, spiritual trance music.

Beissel is a CD-only release. 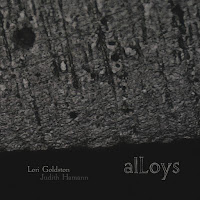 Hamann plays freely with cellist Lori Goldston on two half-hour tracks on Alloys. Goldston operates in both popular and avant-garde spheres, and is perhaps most famous for playing on Nirvana’s MTV Unplugged in New York. Goldston is one of Hamann’s ongoing duo collaborations along with Rosalind Hall and cellist Anthea Caddy.

The music is an ebb and flow of cellos, a kind of languorous, often whispered communication using subtle dynamics, volume, space as language. Both players mostly bow, and their tone is rich and full, often creating overtones and multiphonics that produce four lines. Their plucking is plaintive and austere, at times recalling an eastern music that I can’t pinpoint. They utilize the full neck, and interject stuttering bow tapping, glassy whistling, and metallic sawing into the conversation. It’s haunting, eerie, and cinematic.

Alloys is available digitally and on CD.