Guitarist Joe Morris joins two up-and-comers for two outings of free playing in loose methodologies/thematics, both recorded at Firehouse 12 studios and both released on Fundacja Słuchaj!. 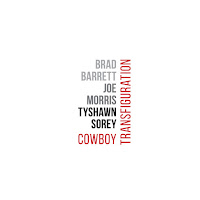 Contrabassist and cellist Brad Barrett plays with Morris and percussionist Tyshawn Sorey for 5 tracks over 53 minutes on his debut as leader. Though Barrett counts Morris as a mentor and has played with him frequently, I believe this is their first recording together. And, to my surprise, Morris and Sorey have only ever recorded together on the monolithic Pillars.

The playing here is completely improvised, though within a vague framework explicitly influenced by the compositional styles of Morris, Anthony Braxton, Cecil Taylor, Webern, Stockhausen, Derek Bailey, and Barry Guy. The way the methodology is described just sounds like good old improvisation, except that it asks performers to “employ small particles of sounds and blend timbres with an awareness of implied pulse and an inclination to disrupt it..”

The result provides a simultaneously fun and frustrating challenge for the listener. The first three tracks feature Morris picking clean, jagged lines with glimpses of the blues, Barrett plucking similarly (with occasional arco), and Sorey providing bubbling, rumbling skins and skittering cymbals. A cursory listen reveals few -possibly no- changes in volume, density, time, or dynamics. Close listening (several times in my case) reveals subtle communications, rhythmic microchanges, and playful subversions. These first three tracks are both easily dismissed as monotonous and the best exhibition of the arcane complexity at work here. The last two lengthier tracks provide a similar complexity but with more obvious dynamic changes at a slightly more relaxed pace. Barrett uses a bit more arco, begins “Requiem for a Catfish” with a timbre that sounds like a detuned, muted guitar, and utilizes some bow tapping at the end of “Slither Cake” and Morris matches these odd textures. Sorey crumples some things, rubs the drumhead in such a way that sounds like a bowed bass in “Requiem for a Catfish,” and bows the cymbals on “Slither Cake.”

A bit abstruse but well worth revisiting repeatedly. Not necessarily texturally exciting but singularly rhythmically genius. I still haven’t decided whether it’s the most annoying thing I’ve listened to this year or the best.

Cowboy Transfiguration is available digitally and on CD. 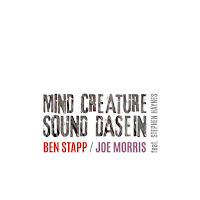 Ben Stapp (tuba, euphonium) has recorded with Morris and Stephen Haynes (cornet) before, on Pomegranate with William Parker and Warren Smith. And Morris and Haynes also recorded together on Parrhesia and Sorey’s Pillars. On Mind Creature Sound Dasein, they play for 63 minutes over 11 tracks.

They play freely, though Stapp provided some thematics, presumably in the form of a loose narrative that tethers the sounds to the inventive, playful titles. And the music is as visually stimulating as the titles because each musician’s playing is colorfully exuberant in their timbral adventures.

Mind Creature Sound Dasein is available digitally and on CD.